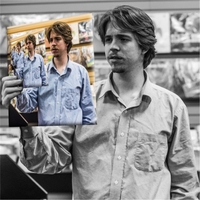 Almost Lifelike is a strong sophomore effort that should earn the multifaceted Shadowplay a lot of local, if not national, recognition.

Although its “roots” stretch back a full decade, New Jersey alternative rock outfit Shadowplay was made official by lead singer Andrew Corkery and guitarist Dan Holden in 2009. Since then, the quintet (which also includes drummer Jamile Wiggins, bassist/guitarist Ed Flynn, and bassist/pianist/guitarist John Sellers) has utilized influences like Russian Circles, Muse, the Beatles, Radiohead, Mogwai, Led Zeppelin, and The Darkness (among many others) to yield one EP (Ghost Train) and two LPs (Visions and Almost Lifelike). Whereas many artists suffer the dreaded “sophomore slump,” Shadowplay’s second full-length finds them veering towards “a much more mature level of craftsmanship” that oozes assurance and consistency while veering towards a “horizon” of styles beyond simply “the sounds of classic rock and grunge music from the 70’s and 90’s.” Indeed, there are bits of post-rock, jazz, and ambiance as well, making the record unpredictable and mixed enough to let Shadowplay display its own identity. (Oh, and the accompanying artwork is very creative, too.)

Opener “Zach Likes Trains” sets an atmospheric stage, with a hypnotic coating of deadened guitar notes cascading over Corkery’s poetic, high-pitched verses (“The sky was black when you came back / But I could see your face / Your face was old, your stare was cold / Your life was written in your gaze”). Once the percussion, bass, and additional guitar chords burst through, Corkery develops a harsher tone that, combined with his softer side and the surrounding groove, evokes classic Dredg. There’s a strong sense of dynamics here as well, with the arrangement fluctuating frequently between full-on rock madness and bittersweet serenity. It’s a powerful starting point overall.

There’s a catchier and more upbeat vibe to “Amira,” whose robust bass presence fuses with angelic backing vocals and vibrant timbres to recall the production of Jolly. Afterward, the band offers a satirical response to one of today’s most egotistical artists with “I’m Kayne West.” Honestly, aside from the inherent joy of Shadowplay ripping into him as a means of commenting on the vices of selling out and celebrity, it’s an okay track at best, with lackluster lyrics and vocals pouring over a merely sufficient foundation. True, the chorus features some interesting vocal overlaps, but aside from that, it’s a “dull and gray” entry. Fortunately, the band yields a more interesting social commentary with “Basement (Full of Spiders),” an aggressive slice of rebellion bursting with alternating instrumentation and political outcries.

The dreamy mellowness of “It’s Time” provides a nice respite from the previous anarchy, with one of Corkery’s most melodically rich performances on Almost Lifelike, as well as an awesome Jimmy Page-esque guitar solo towards the end. Unexpectedly, “All That We Hear” channel’s Oingo Boingo’s “Hey!” and “Pedestrian Wolves” (both from 1994’s studio swansong, Boingo) with its acoustic guitar interplay, rhythmic shifts, electric guitar croons, and warm-yet-sinister vocals. It’s easily the choice piece of the sequence because it stands out so much from its siblings. “Empty Skeleton” follows and feels heartfelt and urgent, with backing chants and frantic guitarwork complementing its reflective verses.

The remaining trio closes the LP well. “She’s Doing Well” is a relatively sparse and earthly ballad that finds Corkery showcasing his full range. Behind him, Flynn decorates the landscape like Johnny Marr or Jonny Greenwood, and Sellers and Wiggins work with a collective rhythmic mind. The penultimate “Spectre” soars thanks to its haunting guitar arpeggios, layered vocals, and surprisingly divergent mid-section, while “Nobody Knows, But You Might” carries the appropriate weight of a closer, using echoed tones to enhance its biting air of futility and forlorn acceptance (“I’ve always wanted what’s best for you, not me / Even if that means you’re going away, far away”). It’s beautiful and tragic at heart yet vicious on the surface—so there’s a lot of depth to it—and it cements Almost Lifelike as a strong sophomore effort that should earn the multifaceted Shadowplay a lot of local, if not national, recognition.