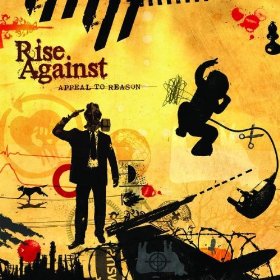 Album Review
Rise Against
Label: DGC Records
Reviewed by ChrisK
They never change who they are or what they stand for, yet like aged wine they only improve over time.

Appeal to Reason is no exception. Sure, the band claims to have approached it as they've done to each of their previous ﾖ with no approach at all. Yes, they returned to the Blasting Room in Colorado to work with legendary punk producer Bill Stevenson. You better believe it they wrote songs about political freedoms, oppression, and living a meat free lifestyle.

In fact, looking back at the band's career, one can easily tell the musical roots have been growing organically for their 10 year career. Those roots, still planted in DIY punk rock ethics are not going to be uprooted as easily as everyone would like. The band has achieved major label success, Top 40 success, gold record success. But they're still Rise Against.

Appeal To Reason is 13 solid Rise Against songs. They may be longer (some over 4 minutes) than past records. They may be more melodramatic, less abrasive. But they are Rise Against. From the first track "Collapse (Post-Amerika)" to the acoustic ballad "Hero of War" to the ending hymn "Whereabouts Unknown", the album is Rise Against, and that is all any fan, new or old can ever desire.

Run For Your Life