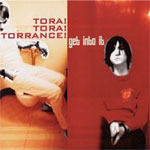 Yeah, I know the name is a mouthful and for all you So Cal locals let me just clear something up cuz I know you are wondering, no these guys are not from Torrance, they are actually from Minneapolis.

So first off I have to get the obligatory comparisons out of the way. You've no doubt been exposed to the resurgence of retro garage rock inspired bands taking over mainstream media these days, do these names ring any bells? The Hives, The White Stripes, The Vines, The Strokes. Well anyway, "Get Into It" from Tora! Tora! Torrance is definitely in the same vein but these guys have just enough underground edge to fall under the radar of the mainstream media. And as far as the whole "retro" thing I don't get the feeling that these guys are trying to recreate any nostalgia for the bands of yester-year but instead the record comes across as being full of heart and energy.

These guys know how to right some great songs and with song titles like, "Killer Cut The Phoneline", "Upstairs Bedroom At A Party" and "Wear A Ski Mask If You Wish To Be Avoided" you can get a feeling of their originality. This isn't one of those records that you have to hear a few times to appreciate... from the first time I popped this into my CD player I was I was able to "Get Into It" (do you like the way I worked that in, that's the title of the cd... pretty clever, huh). Anyway, if you like loud snotty vocals, brash guitars, feedback and overall punk-tinged garage rock then you will enjoy this one.