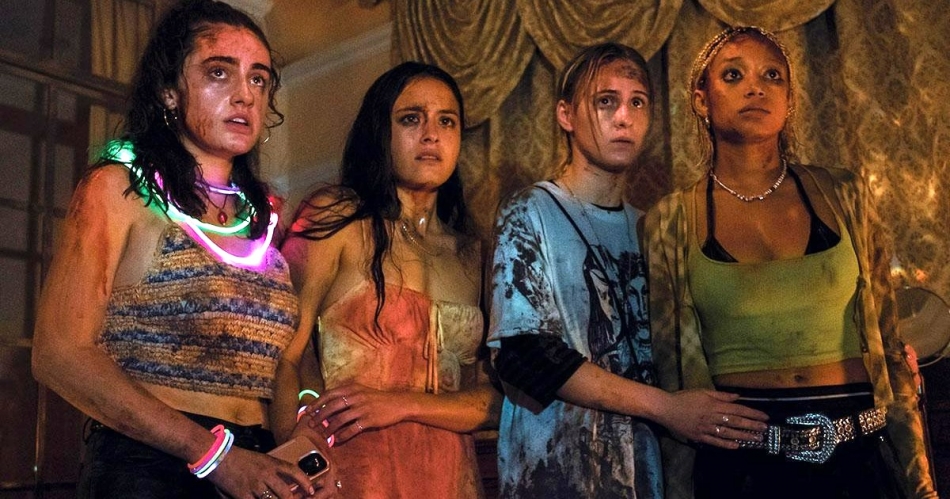 In some ways A24 thrillers have become an archetype of themselves – throw together some neon lights, pump up the Charli XCX-esque tracks and toss in some vaguely familiar Gen Z actor names, rinse and repeat. While Halina Reijn’s full length directorial debut for Bodies Bodies Bodies does encompass some degree of those elements, there’s no denying the film is smarter than it looks. Planning an overnight slumber party in light of a threatening and looming hurricane, five friends plus one boyfriend (and one stranger) spend the night in a fancy mansion only to have things go seriously wrong, seriously deadly and seriously funny.

We’re first introduced to Sophie (Amandla Stenberg) and Bee (Maria Bakalova) during their budding six week short romance and quickly come to realize that Sophie and her friends have a history of shady behavior. Coming out of rehab for drug and alcohol abuse herself, Sophie’s friends and ex-partners are also fraught with vapid narcissism, past violence and a track record of dating older men. Seemingly close-knit relations are already severed and laden with tension and untrustworthiness. Bee, new to the group, plays a naive and sober character with an overbearing mother who is introduced to an onslaught of drugs and liquor for the very first time. The audience is generally watching the chaotic events unfold through the eyes and mind of Bee as she quietly observes her questionable surroundings and the seedy behavior of the others.

Incorporating the use of cellphone lights and brief lighting strikes throughout the gigantic mansion, Bodies Bodies Bodies instills a terrifying and jarring space with its unpredictable and spiraling nature, coupled with its eerie Disasterpeace score. More than a simple whodunnit murder mystery tale, the film encompasses satire to its advantage while portraying obsessive self regarding characters, Alice (played by Rachel Sennott) who has their own podcast that no one cares about, and Emma (Chase Sui Wonders) whose aspirations as an actress fall flat and fake to the others. What comes across on the surface as a reconnecting of friendships soon escalates into petty gripes, rife with all too common media buzzwords as they accuse each other of gaslighting and silencing. Reijn’s characters take themselves so seriously it’s damn near comedic and offers considerate insight into how neverending these arguments can be as we’re confronted with them in our own realities. Though a couple of the scenes feel forced and ‘insufferable’ could be one way to describe this movie and its protagonists (and understandably so), Reijn succeeds in blending dark wit and humor to an otherwise grisly and violent Gen-Z anthem of a thriller.