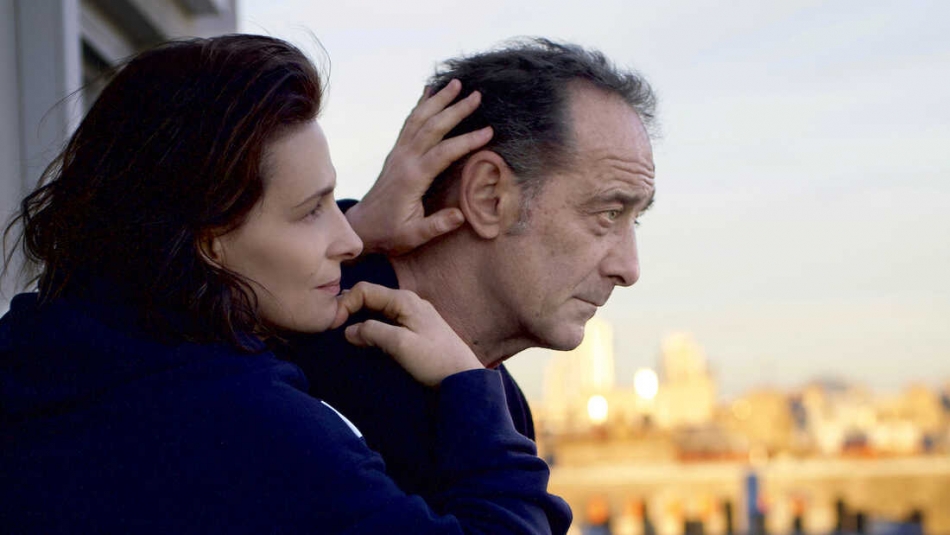 Exploring the delicate and intricate connections between lovers and within relationships, French director Claire Denis has released yet another drama-romance masterpiece by way of Both Sides of the Blade. Based on Christine Angot’s 2018 novel, Denis continues her directorial work with Juliette Binoche, Vincent Lindon and Grégoire Colin (who have previously starred in Denis’ Let the Sunshine In, Bastards and The Intruder) as a married couple, ex-boyfriend and ex-best friend find themselves involved in a complex love triangle, threatening the ties of a seemingly loving ten year marriage.

Opening the film with acts of affection and intimacy while on vacation, it soon becomes apparent that Sara (Binoche) and Jean (Lindon)’s marriage is not what it appears to be. Surrounded by dim lights and overcast weather in their gray apartment, we learn that Jean was in jail for a number of years and carries a tumultuous relationship with his teenage son, whom he had with his previous wife. When Sara catches a glimpse of her most recent ex-boyfriend, François (Colin) near her work, her emotional reaction is near palpable and its intensity severe. Jean, trying to get his life back in order after being released from prison, takes up a job offer as a recruiter with François, his ex-best friend. Once a former rugby player, he’s elated at the prospect of being involved in sports and maintaining a stable income again. Jean frequently pulls all nighters at the office, refusing to divulge any details of his pay or comings and goings with François to his wife. Clearly a sensitive subject, Sara persists in getting her husband to open up about his feelings towards François coming back into their lives, whereas Jean continues to remain stoic and unfazed. “Nothing’s bothering me”, he replies to Sara one night, a placid response that begins the first rift of many in the breakdown of their superficially intact communication.

Denis’ use of body language to portray one's inner thoughts is what makes the relations between the three characters all the more potent. Soft, whispered sentiments and extended eye contact between Sara and François display more emotional passion than her romps in bed with Jean, her eyes closed throughout the entire act. Small yet inherently meaningful behaviors like getting dressed up the first time she meets François face to face carry extraordinary weight, leaving the married couple anguished at extracting the minute meanings of their outwardly innocent gestures. Sara realizes the pain and fear that inevitably come to connecting with her former lover again, yet she argues that the risk to her heart and toward her partner may just as well be entirely worth it. While the intensity of Both Sides of the Blade’s love triangle might occasionally be excessive, there’s no denying Denis has an innate knack for uncovering humanity's  subtleties and expression of emotional turmoil onscreen that binds us to the ones we love and have once loved.