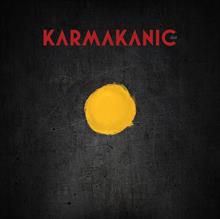 ‘DOT’ explores everything that makes the more symphonic end of the genre so special.

There’s something characteristically playful, luscious, and vivid about modern Swedish progressive rock. Sure, there are some exceptions, such as Pain of Salvation, Anekdoten, and Opeth (each of which is incredible in its own ways), but there is an equal amount of acts that soar with quirky songwriting, flamboyant tones, dense arrangements, and bouncy energy (namely, The Flower Kings, Kaipa, and the now-disbanded Beardfish). Of course, there’s also Karmakanic. Founded in 2002 by bassist Jonas Reingold (who’s also a member of The Flower Kings and Kaipa, so he’s a major factor in the aforementioned trend), the group’s previous four studio LPs are highly regarded within the field. With their latest effort, DOT, the sextet may have outdone themselves, as the record is packed with rich instrumentation, compelling melodies, and an array of dynamic range. It’s a wondrous progressive rock journey.

In the album’s press release, Reingold clarifies that he was inspired to write DOT after he “stumbled upon a text by the famous American author and astronomer Carl Sagan. He was talking about how small and insignificant we are in this vast universe . . . . it´s fascinating to think that this little dot [Earth] is all we are and all we´ll ever be . . . it gives us perspective.” In addition to the official members (which include lead vocalist Göran Edman, drummer Morgan Ågren, keyboardist/vocalist Nils Erikson, keyboardist Lalle Larsson, and guitarist Krister Jonsson), DOT features a guest appearance by keyboardist (and Tangent founder) Andy Tillison.

Although opener “Dot” is extremely brief and consists of static and sci-fi/apocalyptic sounds, it sets the stage well for “God the Universe and Everything Else No One Really Cares About, Pt. I,” a twenty-four-minute opus that surely ranks as one of the best progressive rock epics in recent years. Its first movement builds subtly from delicate piano and acoustic guitar chords into a complex rocker brimming with fiery energy and colorful layers. Edman bellows with a strong synthesis of power and fragility on top of it all, and his chorus—“Time and time again / On and on, my friend”—is undeniably hypnotic. There’s an overarching sense of desperation throughout this section, too, like the band is witnessing the end of humanity.

Following a charming instrumental passage (complete with lovely flute, piano, and bass flourishes), Edman returns for a slower and softer passage whose harmonies and melodies are blissful. It’s a more upbeat and peaceful section overall, with standout lead guitar and keyboard solos. The inclusion of a children’s choir halfway through the track is a nice and meaningful touch, too, and it balances nicely with the increasingly festive but foreboding backing music. From there, various transitions alter the arrangement seamlessly to juxtapose heaven and hell in musical form; each moment is regal, affective, creative, and tight, yielding some truly impeccable and involving artistry. Similarly, the closing moments find all the voices uniting expertly for dense hopefulness, and it’s quite empowering.

“Higher Ground” is more straightforward and poppy initially, as standard percussion and restrained instrumentation guide direct verses. Eventually the track becomes more sophisticated and expansive, with plenty of eccentric embellishments, before concluding with serene vocal layers. Afterward, “Steer by the Stars” packs a motivational punch suitable for an ‘80s action film montage (surprisingly, this isn’t too uncommon in 2016, as Haken’s latest LP, Affinity, also captured this style). It ends with an impressive vocal row that recalls classic Gentle Giant.

Reingold offers a dominant bass lead to start “Traveling Minds,” and it melds nicely with faint piano and guitar arpeggios. Soon a guitar lead and forceful drumming take over and ultimately move around more dreamy harmonies. Erikson sounds extremely impassioned and steadfast here, too, as the arrangement explodes around his prophetic decrees. Expectedly, DOT finishes with “God the Universe and Everything Else No One Really Cares About, Pt. II,” which begins almost identically to its counterpart; however, rather than launch into a lively outburst, it maintains the mournful air as regretful singing and more timbres appear bit by bit. Of all the pieces here, this one probably evolves with the most elegance and emotion, and despite a heavy jam in the middle, it’s generally a gorgeous and gentle counterpoint to its predecessor’s majorly hectic voyage.

DOT isn’t a breath of fresh air by any means; honestly, it sounds significantly similar to Reingold’s aforementioned other outlets, yet that doesn’t take away from its magnificence or impressiveness. After all, any group of musicians who can cumulate their contributions into such a robust, imaginative, complex, and far-sighted sequence deserves acclaim (even if it’s not especially inimitably). Karmakanic includes some of the most skillful and creative performers around, and they’ve set an immeasurably high bar here. Without a doubt, DOT explores everything that makes the more symphonic end of the genre so special.