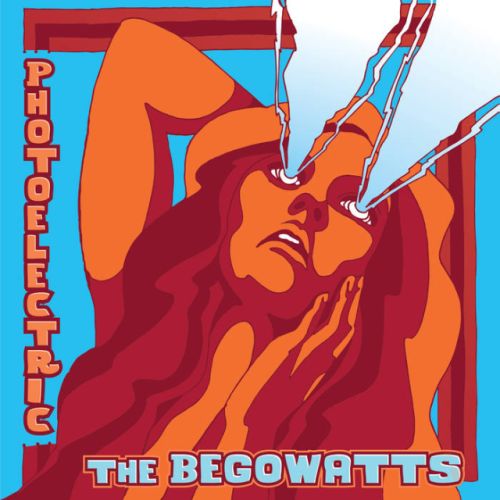 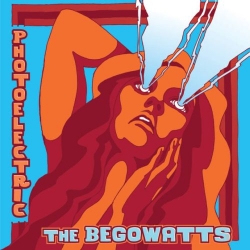 The mild-mannered by day, but rock stars by night The Begowatts releases a bright to gritty rock ‘n’ roll album.

The guys who The Begowatts may appear to be mild-mannered, highly educated members of society, and while this is true, they also all have a secret identity – that of rock star.  The band blazes like the sun on its traditional hard rock debut album Photoelectric, which was beamed out on June 17th.

The story of The Begowatts began a long time ago (Well, not that long; in 2012.) in a galaxy far, far away… at the University of Wisconsin to be exact, where David French (lead guitar, lead vocals), Benjamin Tofflemire (rhythm guitar, backing vocals), Aaron Androsky (bass, backing vocals), and Arthur Eigenbrot (drums, percussion, backing vocals, occasional lead vocals) met up as graduate students of the Astronomy and Computer Science program.

They decided they wanted to rock out as ‘the begowatts’, a self-named, made-up unit of measurement that melds a Back To The Future quote about “1.21 gigawatts” and ‘Beg Wot’, an East African beef curry that they were fond of feasting upon as grad students.  The Begowatts dropped its debut EP in April 2015, played a bunch of house parties, and became the house band of Bike Shop.

The next logical step was to record an album and the band members enlisted the aid of Greg Norman, cutting Photoelectric at Electrical Audio Studios in Chicago.  It’s clear to hear on the new album that the guys are having serious fun performing as rawk ‘n’ roll dudes with a free and easy attitude.  Lead single “Lawmaker” strolls along in the casual spirit of classic rock music with its bracingly sharp, twisting guitar lines, restless drum beat, and tossed-off declarations from French, like, “It’s my way or the highway / Take your pick.”

“Dangerous” treads with a more cautious step at its start as a muffled drum beat and lightly stroked guitar and bass lines mix before the guitars plunge into fiery, short-phrase riffs.  The cymbal shimmer, steady drum beat, and cycling guitars churn for a while before French comes in, sing-talking in a deeper tone, bemoaning the fact that, “Love is a disease…”  Crusty “Rock Lust” blasts out with cranked-up guitar riffage, a cantering drum beat, requisite cowbell clanks, and French exclaiming in true (old-school, traditional, and maybe a bit moldy by now…) rock fashion, “She’s got legs for miles.”

The guys speed and crunch through the highly amusing “Rock The Bugs Out”, which features Eigenbrot on hardcore-like shouted out vocals.  Blistering guitars support his wild, faux-menacing vocals as he exclaims, “We got too many bugs in this house / We gotta find some way to get them out / There are centipedes, creepy-crawlies…”  Anyone who’s lived in a college dorm or shared a house with 4 or more other people in their early 20s will understand where The Begowatts is coming from on this number!

“Daydreamer” lays it down with a chugging pace of pronounced drum hits, and fiery, fuzzed-up guitar lines.  French calls out in a vinegary, heartfelt tone, “I am a daydreamer.” while backed by airier male vocal ‘Ahhh’s.  The band ends the album on a more reflective note, “…Still Daydreaming” amid glisteningly liquid, picked guitar lines and French’s starkly delivered words, “The sun’s down / The lights are all dark / and I am still dreaming.”  A subdued drum beat, cymbal tick, and short jags of distorted guitar rise in intensity as the song moves along, building up to a vivid finish of screaming guitar lines flying to the sky. 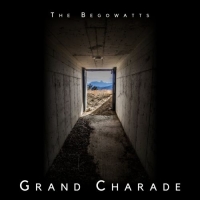