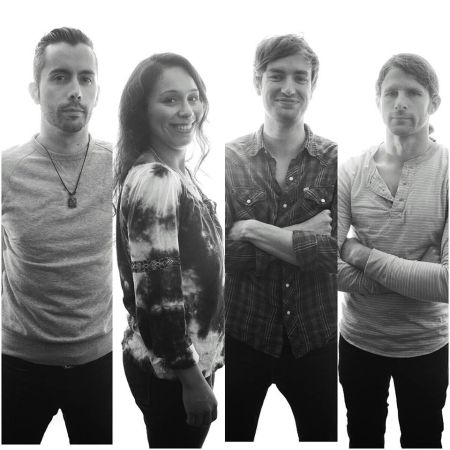 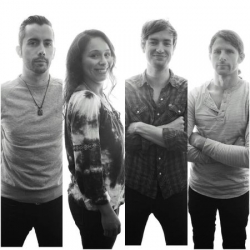 Los Angeles-based alt-rock/rock ‘n’ roll four-piece Electric Parlor dropped its debut self-titled album at the end of this past winter and its sizzlin’ guitar licks, searing vocals, smoldering bass, and scorching cymbals and drums rhythms create enough heat to warm up the cold winter blues.  The band members Monique Alvarez (vocals), Kris Farr (guitars), Josh Fell (bass), and Zachary Huling (drums) came together in 2012 with the mutual goal of forming a blues-inspired rock ‘n’ roll band that was all about the raw, live energy they put out on stage.  They recorded their debut album in this manner and released it through their Bandcamp page and on iTunes via Smooch City Publishing.

While the band plies a traditional rock ‘n’ roll style, Monique as the frontwoman gives Electric Parlor a distinctive twist.  It’s not often that one finds female vocals at the core of a rock ‘n’ roll band’s sound and Monique gives it her all with her blistering, exclamatory vocal delivery.  Monique’s enthusiasm, defiance, and supplication all wend their way through the band’s tunes and give the songs a sharper emotive edge.  While Monique’s vocals have been compared to Janis Joplin’s tone, one can also hear a streak of Kathleen Hanna’s joy and daring in Monique’s vocal register.

Monique growls “I wanna get reckless.” with a free ‘n’ easy flow against gritty guitar lines, cymbal scintillation, and a kinetic drum beat on album opener “Reckless”.  She blazes through the lyrics of “Roll my dice / Don’t you know that I’m a whiskey mama / I don’t wanna see tomorrow.” with the instrumental accompaniment following suit.  A romping drum beat thumps prominently on next number “Rage” while a flexible bass line, cymbal crash, and wiry guitar lines tangle around Monique’s howls of “…if you see me getting’ too low / then throw me an anchor and pull me to shore.”

The more measured-tempo of “Frisco High Line” marches with a strong drum stomp, cymbal shimmer, and occasional fuzzed-up and piercing guitar lines.  Monique emotes over the sonics, squeezing her vocals out and up to a higher register.  On the soulful, affecting “Bitter”, the spotlight is on Monique’s pushed-to-the-edge, cracking and hoarse vocals as she wails “You broke my heart in two, baby / I don’t know what to do with myself.”  She’s backed by an emphatic drum beat, cymbal hits, and a fluidly wavering guitar line that shifts into a bluesy moan, matching Monique’s desperation.  The light percussive clatter of drumsticks and cymbals fills the start of the low-key “Young Blood” as the bass and guitar lines twine around each other.  Monique comes in more contemplatively on the verses, declaring “Open my heart / Set me free.”

The 70s-styled “Promised Land” picks up the pace with a rhythmic groove, guitar runs, and dynamic drums and cymbals tempo.  Monique rips it up vocally, exclaiming “Sugar daddy, won’t you run with me / to that places where you know I’m free.”  Ending number “Last Battle” gets downright serious with a build-up of foreboding deep bass and guitar lines and stormy drum brew.  Monique proclaims with passion “I’d rather die on my feet / than live on my knees.”