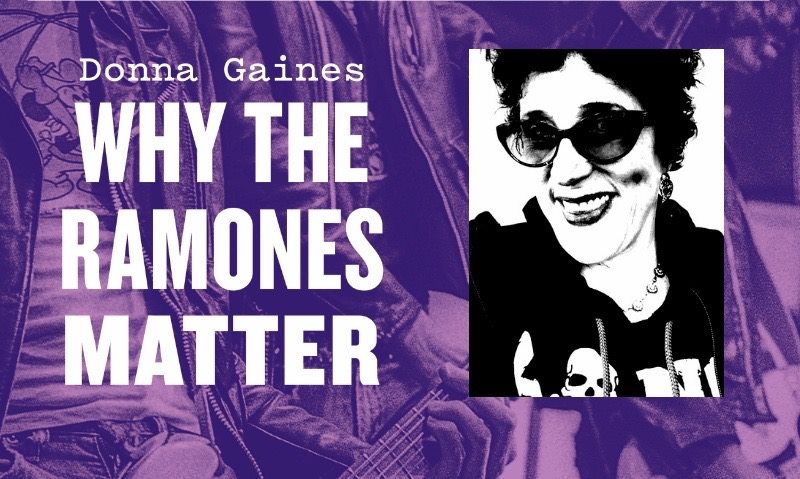 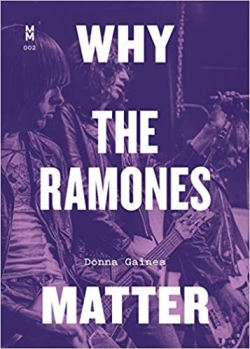 Is there anything more iconic American rock and roll than the Ramones? Next to the king of the peanut butter and banana sandwich, Elvis Presley, probably not. While they’ve been a part of the punk lexicon for more than 40 years, the legend of the hardest working band of losers only grows with time.

For many of us, the Ramones were a symbol of our culture, one of those self-truths as enigmatic as the Chuck Taylors they wore or the vinyl we’d pick through at shows. If you grew up the world of underground music, the Ramones were one of those bands that even if you didn’t listen to them, you respected them because they paved the way for all of the waves of bands to come.

Despite coming out a few years back, Donna Gaines Why the Ramones Matter (University of Texas Press) is less of a detailed history of the godfathers of punk, but a barbed wire love letter to the four freaks in leather jackets and why we owe so much to these guys from Queens who changed music history. Without their rapid-fire riffs, a whole generation would have turned out a lot differently.

Theirs is a complicated story of staying true to a mission rooted in the belief that music mattered more than all other things. Without the Ramones, thinking about what music is and what it means, all of the bands who sprung up in their wake is hard to fathom. While the Sex Pistols schtick is adored for its apparent lack of fucks, the Ramones strike a deeper, more personal chord, something Johnny Rotten never achieved with all of his posturings and sneering all the way to the bank.

The Ramones circular presidential logo is as culturally relevant as the Nike swoosh or the Chevy bowtie – and if you don’t believe me, look at all of the Hollywood assholes sporting vintage Ramones t-shirts who can’t name a song but can tell you what the perception of “cool” is to them. And while those slags might be pissing on our collective church, it is what it is. At least the right people are making a buck. For what those guys put up with, they deserve the love, even in death.

Like Dee Dee hollering out before every song, Gaines rips through the Ramones lore as a series of thoughts mixed with nuggets of personal experience, a front-row glimpse of what it was like to sweat alongside the masses while Joey held his famous “Gabba Gabba Hey” sign.

Woefully managed, the Ramones should have had an easy street career while active, but instead, they slugged onward in gross vans, playing every theater, dive, and club from Huntsville Alabama to San Francisco California. For over two decades the band never stopped writing records, playing show after show. The only thing that killed the Ramones was cancer. While some people call it the “curse of the Ramones” throughout the pages of Gaines book, you start to believe it.

Throughout the book, Gaines details how the band was a collective of personalities that should have never worked, but somehow did. Johnny Ramone being an unfettered Republican asshole who phoned in every interview, while Joey was apparently the sweetest guy to hang out with, even if he was rotting away from lymphoma. Joey, Johnny, Dee Dee, Tommy, Marky, and C.J., all of their stories, are intertwined into Gaines narrative, bruises, backstabbing and all. Joey and Johnny hated each other, Dee Dee was a crackhead, Marky was a drunk, all kinds of lurid details go into the story of the Ramones and throughout the pages of the book, and it’s unrelenting.

The more you learn about the band, their struggles it goes beyond some dudes writing anthemic songs, but instead we’re slapped over the head again and again with one truth: the Ramones were a pack of sad, fucked up guys that managed to channel everything wrong with their lives into a body of work that transcends genre, time and space.

While a lot of books on the band are out there, many written by guys who wrote the songs themselves, Gaines book is a true patchwork of thoughts, emotions and rings true for all of us pinheads.