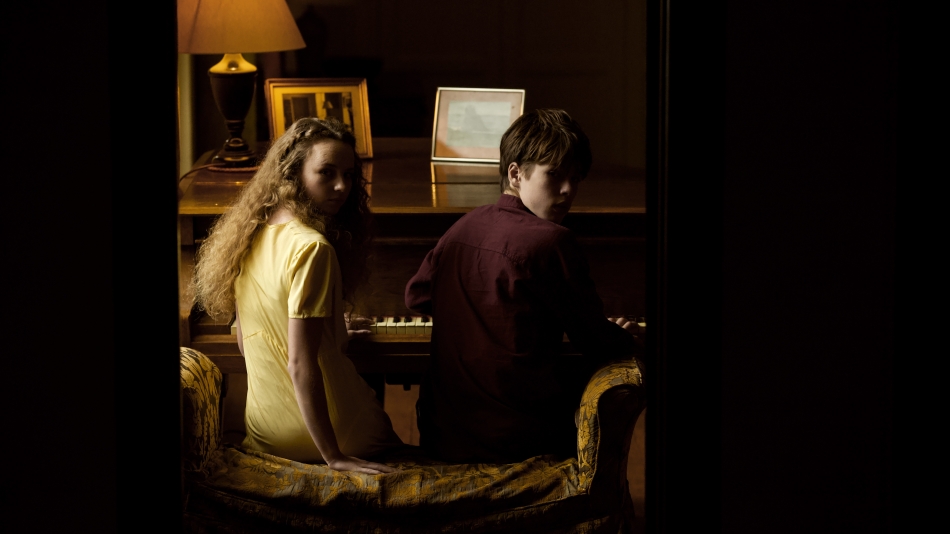 Meeting your fiancé's children and ex-wife for the first time is already nerve wracking in and of itself, but what to do when your arrival is met with the most distressing of conditions? In Sebastian Godwin’s directorial horror/suspense debut, Homebound sets the stage for a slow burn of chilling and atmospheric tension. While the secluded setting and unsettling score build to unwavering unease for the viewer, the film ultimately falls flat due to its predictable deliveries and one-dimensional characters.

Holly (Aisling Loftus) and Richard (Tom Goodman-Hill), recently engaged, drive out to the desolate English woods to introduce herself to her fiancé’s three kids. Distrusted from the start, Holly’s anxiety is palpable as she struggles to befriend the children and has no answers as to why their mother hasn’t yet made an appearance in the house.

The youngest, Anna (Raffiella Chapman), naïve and playful, celebrates her birthday when things start to take a questionable turn as Holly observes Richard’s careless attitude toward his children consuming heavy liquor during their dinner. Ralph (Lukas Rolfe) has but a couple lines of dialogue and the eldest, Lucia (Hattie Gotobed), has a perpetual sour expression throughout the whole film. Holly’s husband-to-be immediately ricochets between pleasant and temperamental which leaves the audience wondering how much Holly really knew him in the first place.

Godwin’s score is skillfully utilized to permeate the setting with a foreboding sense of dread without relying on scare tactics or special effects. Employing long shots of dark hallways and questioning what lies behind closed doors also escalates the horrific mysteries that lay within the house and its residents. Rather than relying on gore or gruesome scenes, Homebound leaves its impending nightmares up to the viewer’s imagination.

As the film unravels, clearly Richard’s children are troubled in their demeanor. Ralph dunks Holly’s head in their pool as a clear attempt to drown her while Anna prepares graves for her toy dolls out in their backyard. Emphasizing the generational trauma and abuse within Richard’s family feels a little too on the nose in Godwin’s film, giving his characters superficial personalities and obvious traits that fall short of conveying convincing psychological depth. While Homebound manages to keep the tension high during the first half of the film and is clever with how much (or little) is explicitly shown on screen, there’s not much new or imaginative paved in the way of suspenseful horror for viewers to attend to.

Fantastic Fest 2021: Alone With You Review