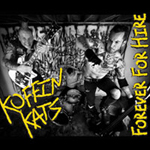 Psychobilly for the next decade

The Koffin Kats are a psychobilly trio from Michigan. They mix the swing of classic rockabilly with the ghoulish themes of the Misfits and fast paced energy of old school punk rock. Releasing FIVE albums in six years and constantly touring, this band proves that high-octane psychobilly is alive and kicking.

Their fifth full length album, "Forever for Hire" was released in October 2009 on Stomp Records. Fourteen tracks of filth, speed, angst, aggression, and mosh inducing sonic blister. The record starts heavy and fast out of the gate with 'Nostrovia' and continues throughout. Vic Victor leads the bass assault on the upright, Tommy Koffin slings the guitar and screaming vocals, and Eric "e Ball" Walls keeps the beat on the drums.

"Forever For Hire" is the best psychobilly album to be released this year, thanks to songs like 'Heading off to Battle' and 'The Final Day' which show the skull, ability, and overall energy of THE KOFFIN KATS.