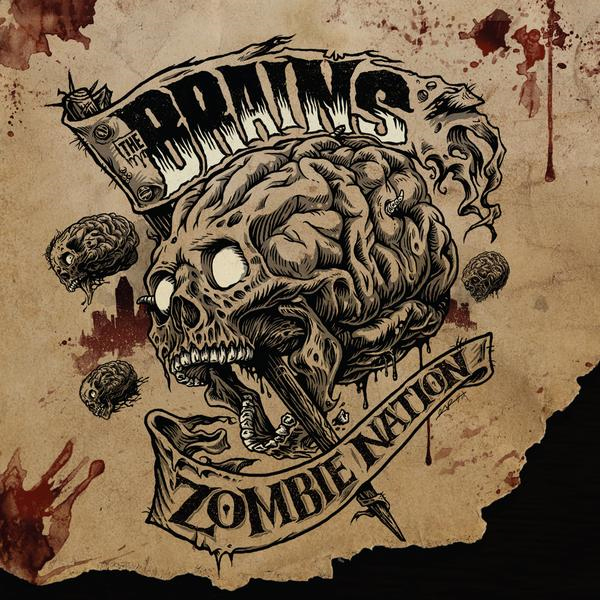 The Brains fourth release, "Zombie Nation" is the band's best work to date. The release picks up improves where 2009's self-titled full length left off. Some of the best and biggest names in psychobilly and rockabilly lend their unique talents on this recording including Setin, Matt, and Andy from the legendary Mad Sin, Dan Deleon from Rezurex, and Richy from Blood Sucking Zombies From Outer Space.

The title of the album and artwork suggest it is filled with metal infused violence, but many of the songs are upbeat and more comparable to bands like the Clash, Ramones and Misfits rather than death metal gore. Of course, the band still speaks of the undead and eating brains for dinner, but many songs do so in the form of a story rather than a simple chorus of repetitive scary words. "Devil's Crossroads" speaks the tale of a sinner on the run from the devil ready to collect his soul. "Sweeter Than Wine" is a love tale between a zombie and blood and "Apres Cette Nuit" treats listeners to La Muerte singing in his native French language.

What is most notable about Zombie Nation is the musicianship which binds it together. Rene D La Muerte's twang infused guitar tracks blend seamlessly with Colin the Dead's blistering stand-up (yes stand-up) bass stylings all the while held together by Franck O'Brains hard and fast drum beats. The range of upbeat tempos and melodies are present from start to finish, there is something for everyone on this album even the fair-weather psychobilly fan can enjoy.