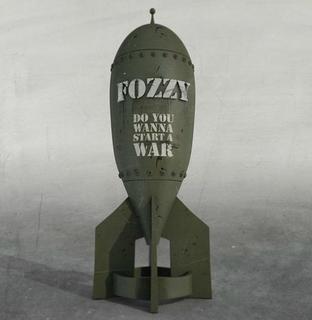 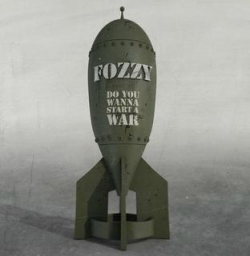 An average heavy metal album from WWE superstar Chris Jericho and company. Nothing more, nothing less.

As we’ve seen time and time again over the years, it’s not uncommon for professionals in the public eye to try their hands at multiple careers. After all, how many A or B-list celebrities are both actors and singers? However, we usually don’t associate wrestlers with other significant ventures, but WWE superstar Chris Jericho is an exception to the norm, as he’s the lead singer for heavy metal quintet Fozzy. They’ve previously released five studio albums of simplistic yet anthemic raucousness, and unsurprisingly, their newest, Do You Wanna Start a War, continues the trend. If you’re looking for superficial chants and generic structures, you’ve come to the right place. There’s no originality here, but at least it’s loud.

Fozzy was founded in 1999 by Jericho and guitarist Rich Ward, and they, alongside bandmates Frank Fontsere (drums), Paul DiLeo (bass), and Billy Grey (guitars), have spent the past fifteen years “shaping their own brand of sonic splendor, [with] Ward’s incendiary guitars forging a path for Jericho’s inimitable vocals atop a rhythmic foundation of earth-rattling proportions.” Unfortunately, the music itself doesn’t reach such lofty heights, as the disc offers little more than the everyday, run-of-the-mill hard rock wrath you’ve heard countless times over the last three decades.

The title track starts things off with token fury, as Jericho belts out clichéd rhetorical empowerment with a clichéd raspy tone as the band chugs along with powerful chords, percussion, and effects. Actually, it would be a perfect choice for his intro salute as he walks into the ring, but as a valuable piece of music, it simply falls short. “Bad Tattoo” is a bit more technical; actually, its guitar flair evokes classic Devin Townsend riffs, although it definitely doesn’t come close to his structural genius. In fact, there’s nothing here that vintage acts like Metallica and Motorhead, haven’t already done.

“Died with You” is your standard metal ballad; the verse is sensitive and calm, while the chorus is as impassioned as can be. Still, it sounds entirely phony and manufactured, with production so pristine that it loses all semblances of sincerity and risk. “One Crazed Anarchist” ups the ante with death metal growls, which come off as more obnoxious and invasive than anything, while “Scarecrow” bids some much needed atmosphere and tranquility. Don’t get me wrong: it’s nothing special, but it does offer a bit of a breather in-between the madness, so that’s nice.

Like so many rock/metal albums these days, Do You Wanna Start a War isn’t inherently bad. The musicianship is solid, the vocals are impressive, and the energy is topnotch; however, the songwriting is utterly shallow, and there’s almost no diversity between tracks (if you’ve heard one, you’ve essentially heard them all). Perhaps its biggest flaw, though, is its complacent, or even smug, attitude. The band clearly thinks that there’s uniqueness and importance to their music, but nothing could be further from the truth. There isn’t an ounce of innovation, depth, or variety here, so Fozzy winds up sounding like Average Metal Band #1,423,526. If that’s good enough for you, check it out. Just don’t expect anything different.