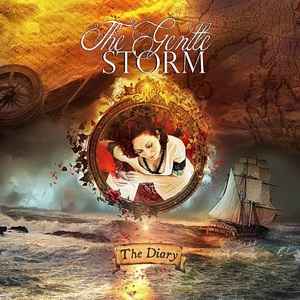 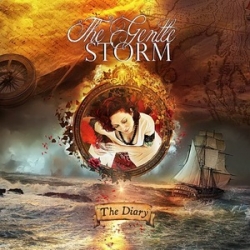 Album Review
The Gentle Storm
Label: Inside Out Music
Reviewed by Jordan Blum

With ‘The Diary,’ The Gentle Storm proves itself as a unique, challenging, complex, catchy, and very inspired new venture for its creative pair (Arjen Anthony Lucassen and Anneke van Giersbergen). Admirers of either performer, as well as progressive rock writ large, should adore it.

Although it’s not as prolific or widely recognized as, say, England, Sweden, or America in terms of progressive rock output, The Netherlands has nonetheless delivered several important groups over the years, including Sky Architect, Focus, and Kayak. However, arguably no modern Dutch genre musicians are as revered as Arjen Anthony Lucassen and Anneke van Giersbergen. As the visionary behind several outstanding projects, including Star One, Guilt Machine, and most famously, Ayreon, Lucassen has crafted some of the best songwriting and instrumentation in the history of the field; likewise, Giersbergen has established herself as one of the most beloved and popular female vocalists around thanks to her work with Anathema, Devin Townsend, and The Gathering (with whom she sang from 1994 – 2007), among others.

As spectacular as they are as individual artists, though, there’s no denying that they often work best together. For instance, Giersbergen sang on two of the finest Ayreon records: Into the Electric Castle (1998) and 01011001 (2008). Naturally, they’re always looking for an opportunity to collaborate, which is why their first official project together, The Gentle Storm, is inherently such an exciting prospect. Fortunately, the duo’s debut LP, The Diary, lives up to all expectations, as it’s filled with Giersbergen’s intoxicatingly seductive yet charming and powerful singing, as well as Lucassen’s established mastery of gripping melodies, symphonic elegance, and ceaselessly intriguing and unique timbres.

Unsurprisingly (given Lucassen’s penchant for the custom), The Diary is a concept album; specifically, it revolves around “a tale of love, loss, and separation told through the story of two fictional seventeenth-century lovers. A Dutch sailor embarks on a two-year voyage, leaving his wife at home in Holland. The only way for the couple to communicate and keep their love alive during the long separation is through letters [songs].” When we recently spoke for Rock Society Magazine, Lucassen remarked that the storyline was Giersbergen’s notion, joking, “I mean, that would never have been my idea [laughs], seeing as I’m a proggy that writes about aliens and stuff, you know? But I figured it would be a challenge for me to do a love story.”

In mentioning that he wrote the music while Giersbergen provided the vocals and lyrics, Lucassen clarifies that The Gentle Storm is different from his other endeavors because of his fundamental approach:

“Usually I compose them all on guitar or I get out my old synthesizers . . .  but this time I did it all on the computer, and it was only string sounds. There’s a double bass, there’s a cello, and there’s a violin . . . that forced me to come up with good melodies and good songs. It’s basically a reaction to my last Ayreon album, The Theory of Everything, which was made up of four tracks that were over twenty minutes each. There was really no structure there; it was just prog all the way. This time, it was a test to see if I can also make structured songs and strong choruses. Can I make an album without all of these cool keyboards and just have a ton of strings?”

Interestingly, The Diary is comprised of two versions of the same album (a Storm disc and a Gentle disc), with each offering wildly different arrangements and treatments. Lucassen reflects that this decision was due in part to the mixed reactions he received for 2000’s Universal Migrator double album (the first LP, The Dream Sequencer, was psychedelic and light, while Flight of the Migrator was very heavy and intricate). He adds, “It’s easy to impress people with a big album, with heavy guitars and a lot of orchestral indulgences. It’s much harder to impress someone with only acoustic instruments, so that was the tough part. Of course, more people are going to enjoy the heavy album. That’s obvious, [and] I was a bit afraid that people would consider the Storm disc as the main album and see the Gentle disc as just a bonus album . . . really, they’re equal records.” Lastly, he says that he doesn’t prefer one collection over the other; instead, his preference varies track by track. Truthfully, that’s how most listeners will feel too.

The Diary begins with one of its catchiest tracks, “Endless Sea.” The heavier account bursts with bombastic strings, thunderous percussion, and Lucassen’s trademark flashy guitar work, while the softer take favors woodwinds, acoustic guitars, piano, and lighter drumming. Neither is superior; they’re evenly matched yet quite different, and both shine most due to Giersbergen’s passionate laments. Afterward, the Gentle form of “Heart of Amsterdam” is a dynamic marvel packed with Middle Eastern flourishes and a jazzy rhythm; in contrast, the Storm style grants it follows a similar template but packs in more metal effects and affectation. To be honest, these contrasts more or less outline the differences between the remaining dualisms, so that’s all that needs to be said on that front. Nevertheless, there are still some outstanding tracks to pick out.

For example, “Shores of India” finds Giersbergen hypnotizing listeners with her quirky Middle Eastern chorus while strings and colorful syncopation ooze urgency in every measure. Later on, “The Moment” proves to be an affective ballad chockfull of gorgeous orchestration, poignant regrets, and emotional signing. Both types also feature an ingenious buildup near the end, with plenty of curious instruments combining for a regal and luscious conclusion. The same can be said for “The Storm,” which contains some of the most unpredictable yet engrossing and inventive arrangements on The Diary (including an “Epic Rock Choir” whose chants add weight and ancient air to the production).

“The Brightest Light” is also a bit jazzy, with plucked strings, hammered dulcimer (or harpsichord), and thick harmonies fusing for an undeniably riveting blend, while the marching beats of “New Horizons” (courtesy of Lucassen’s longtime drummer, Ed Warby) and angelic melodies make it a delightful journey onto itself. Cleverly, the final piece, “Epilogue—The Final Entry,” mirrors the opening of “Endless Sea” at its start, bringing the story full circle. This is no doubt a popular troupe in progressive rock, but that doesn’t make it any less effective or, well, awesome here. From there, it dissolves into bells before Giersbergen offers one last forlorn observation with as much grace and fragility as ever. Remarkably, the Gentle version closes with cymbals and acoustic guitar flourishes, while the Storm favors electric guitar jolts and fiercer percussion.

All in all, The Diary is another fine entry in both artists’ catalogues, and it establishes a truly exhilarating new partnership between two of today’s finest musicians. While there is a slightly stronger sense of sameness in both the production and song structures compared to much of their other work (either together or individually), there’s no denying that the record is still a monumental achievement full of stunning, well, everything. Of course, the fact that there are two versions of it (with wildly imaginative variances) makes comparing them a large part of the enjoyment. The Gentle Storm proves itself as a unique, challenging, complex, catchy, and very inspired new venture for its creative pair, and admirers of either performer, as well as progressive rock writ large, should adore it.