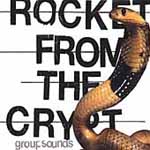 San Diego's premier rocksters, Rocket From The Crypt, stick to a tried and true formula on their latest effort. Keeping in tune with previous albums, GROUP SOUNDS is heavy and leans toward a sleazy rock sound. But somehow you don't feel dirty when you listen to it (which is a good thing). Songs like "Heart of a Rat" and "Venom Venom" drip with sleaze, but the music doesn't scatter or seem lethargic -- it sways from side to side vibrating with soul. All the while, RFTC launches into quirky numbers such as "Carne Voodoo" and "Return of the Liar" keeping the mood lively. With John Reis (better known as Speedo) at the helm, the whole album grooves in unison to an injecting rhythm section accompanied by heavy set, Les Paul strumming. And as always, a subtle horn section accents RFTC's solid chunks of soulful rock. Although the song "Ghost Shark" departs from the album's vivacious rock feel, it's done in good taste with legendary Memphis rock icon Jim Dickenson on piano. Appropriately sequenced as the last track, its creepy and dark mood is the perfect respite. RFTC may be the best-kept secret in rock. So, if you've only heard the name and not the music, here's your chance to hear fresh material that would make any die-hard fan melt.