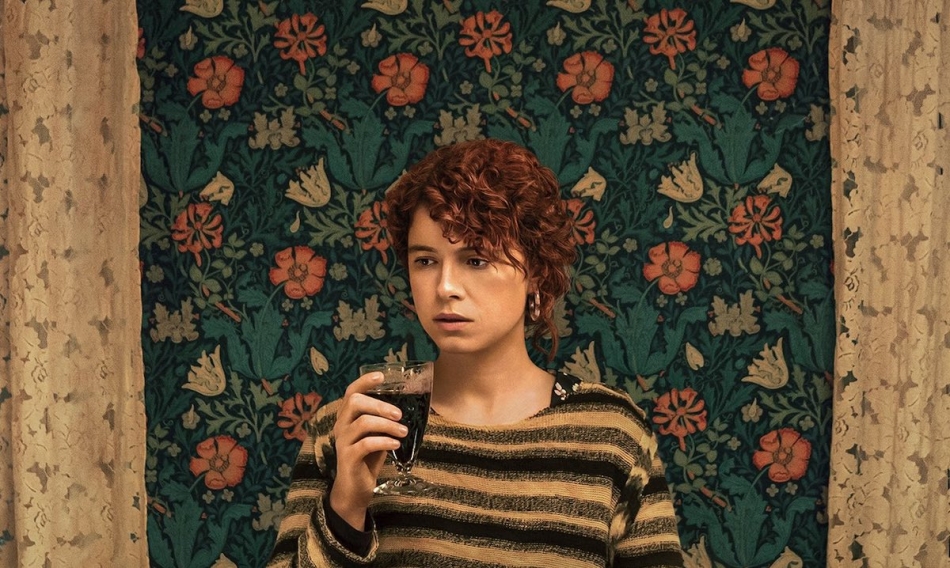 The world is often as grandiose or as limited as we make it — whether that means expanding your horizons by means of explorations and interactions or crafting your own mental scenarios and fantasies in solitude and physical confinement. In Charlie Kaufman’s latest surreal film, I’m Thinking of Ending Things (adapted from Iain Reed’s 2016 debut novel), the director examines contradictory themes of love and loss within one couple’s plight to meet the boyfriend’s parents. Incessant conversing from our narrator (Jessie Buckley) and her boyfriend Jake (Jesse Plemons) while on their road trip from the city to the country permeates with neurotic contemplation over the subjective purpose of love and life, veering towards a melancholic depression with each line of dialogue continually fraught with subtext concerning the very inherent nature of our human condition.

Having dated for what seems like a few months (the origins of their meeting and the length of their relationship are not ever entirely agreed upon), there is an evident lack of excitement and vitality, not to mention a near complete lack of physical affection, as they traverse through an intense snowstorm to meet Jake’s parents for the first time. Reciting lines from a poem, emphasizing that “coming home is terrible”, the brutality only gets worse as our narrator learns of the demise and decay of the animals residing on the farm and the somber and erratic interactions that permeate throughout the house. Identities begin to shift and blend together as we notice similarities between Jake’s sharp intellect and memory and his dad (David Thewlis)’s inevitable dementia, as well as his mother (Toni Collette)’s mental illness and unabating hysteria combined with his girlfriend’s jabbing humor. Kaufman creates a suffocatingly claustrophobic atmosphere throughout the evening as his parents’ physical bodies morph into senile and decrepit old age, causing an ever increasing desperation for Jake’s girlfriend to escape back to the city, yet Jake remains rendered immobile, aiding his parents in their near deathly state.

As the couple eventually return on the road to plow through the increasingly severe weather, there are innumerable references to poets, film directors and musicals arising in conversation. Often filling in the silence or substituted as a defense mechanism for uncomfortably arising topics such as marriage, Jake tends to fill the space with the sound of music playing and early on spouts off a long list of musicals he’s fond of. Privy to the interior of his childhood bedroom, we see it’s full of memorabilia and books of poetry and film reviews, with excerpts that we have already witnessed and heard during their lengthy drive. “Most people are other people. Their thoughts are someone else’s opinions, their lives a mimicry, their passions a quotation. That’s an Oscar Wilde quote”, recites Jake’s girlfriend, as we come to realize all the minute and infinitesimal life consumptions and experiences that make up each of our identities, which can simultaneously be read as the grand unity human beings universally experience, or the vast futility in ever attempting to achieve a degree of individuality.

Interspersed throughout the film are scenes of an elderly high school janitor, idle with his time mopping the hallway floors and consuming his lunch while watching a clichéd romance film that poses starkly against Kaufman’s direction. Never leaving the safe enclosure of the school’s walls until near the end of the film, he observes the various performances the students enact of scenes from musicals and non-verbal dance choreography across the lined rows of lockers. Submerged in the past and attempting to grasp and cling onto the vibrancy of youth, the role of the janitor becomes increasingly evident as the memories and emotions tied with our characters’ pasts unravel, forcing us to continually question who and what is real. “Other animals live in the present. Humans cannot, so they invented hope”, a seemingly optimistic perspective for the way our lives may unfold, yet Kaufman’s I’m Thinking of Ending Things is jarring in its insight into one man’s ceaseless and protective isolation void of other human interaction and the paradoxically harrowing awakening one can succumb to before the big sleep.