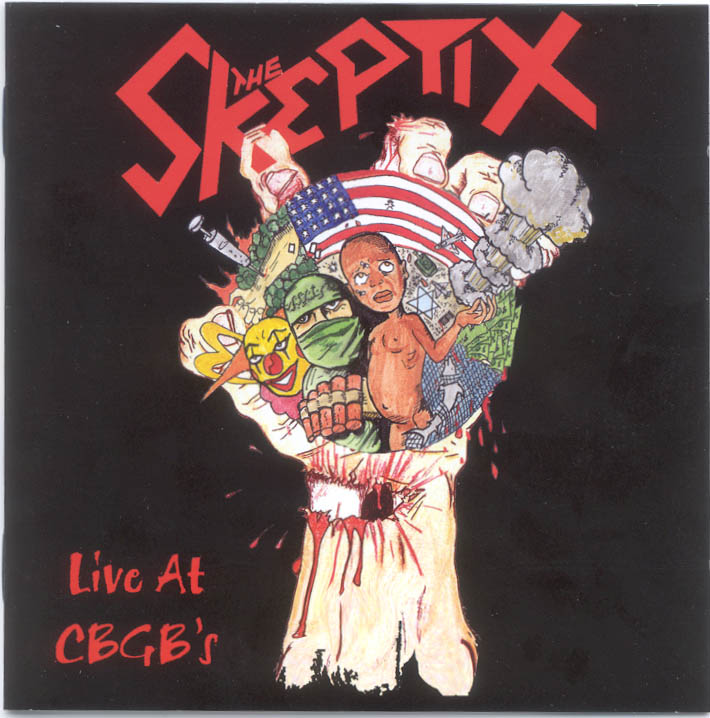 Album Review
Skeptix, The
Reviewed by Janelle
This live album is significant for a bunch of reasons: 1. It's a recording of The Skeptix' brilliant July 2003 NYC showcase, which was a stellar set, indeed! (Don't believe me? Read the wonderful review of this set in the liner notes - man, that's a good writer!) 2. This disc is a massive 72 minutes, meaning it goes the distance, and if one is so inclined as to hit repeat mode, he/she will be kept entertained for quite a while... 3. Of course the legendary U.K. punk band play old favorites like "Legion of the Damned", "Born to Lose", and "Routine Machine", and even more outstanding ones like "Death and Destruction", "Got No Choice", and the wonderful closer, "Stop It While You Can", but the band also showed off NEW material released on last year's 'Hate and Fear' (Thunk Records), like "Blue" and "Life Today", which undoubtedly prove they still know how to write a killer song. Everything is played in a rough, raw, intensely furious manner, the way it should be. 4. Great liner notes - a foggy recollection of the tour from the band.

What's extra nice here is that not only do we get the CB's set from 2003, but also extra live recordings from 1983 - which is definitely cool to hear, meaning we can witness how, really, they've kept up the same unbridled energy after 20 years and still totally sound like their hearts are in it, which is quite a feat in my humble opinion. (Happily, it seems quite a few of the old great punk/hardcore bands have still got it: D.R.I., D.O.A., GBH, Murphy's Law, The Vibrators, Buzzcocks, are some that come to mind...!) Some wonderful songs not included on the CB's part are featured here on the second half of the album, most notably "So the Youth", "Such Is War", and "Curfew". Truly, a must-have for those who were smart enough to get their asses to this show so they can relive every moment whenever the need arises, as well as any fan of The Skeptix' old or new material. Hell, if you're into genuine old-school hardcore punk, this is well worth the money.