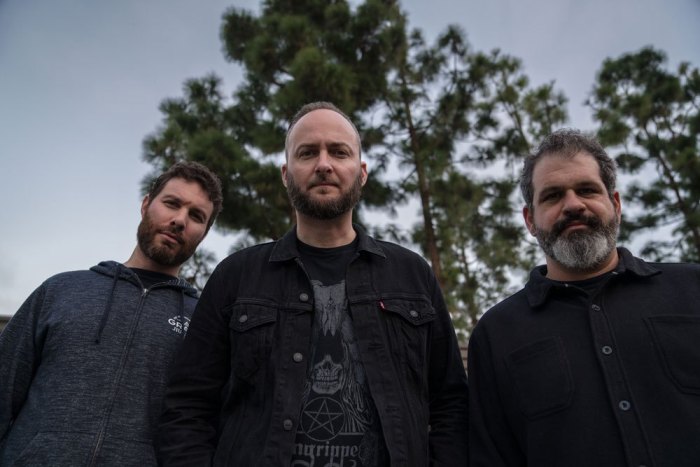 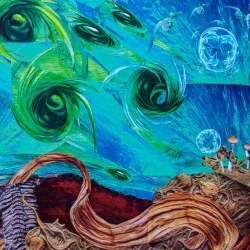 With Fluid Existential Inversions, Intronaut continues to represent the best of what this kind of progressive metal can be.

Currently comprised of Sacha Dunable (guitars/vocals), Alex Rudinger (drums), Joe Lester (bass), and Dave Timnick (guitars/vocals/percussion), Los Angeles troupe Intronaut has spent roughly fifteen years concocting some of the most imaginative, wide-ranging, and technical compositions in modern progressive metal. By decorating their crushing foundation with tons of polyrhythms, jazz flourishes, sludgy/stoner leanings, and avant-garde coatings, they conjure exceptional brethren like BTBAM, Animals as Leaders, Cynic, and Mastodon while always remaining sufficiently individualized. It’s a virtually irresistible formula, and their newest outing, Fluid Existential Inversions, is as good a place as any to become overtaken by their hypnotic magic.

The album is notable for its absence of longtime drummer Danny Walker (who left in 2018), and as the follow-up to November 2015’s The Direction of Last Things, it sees them return from the longest studio hiatus of their career. Luckily, they used that break wisely:  “We pushed ourselves to be bigger and bigger, musically speaking,” Sunable reflects, adding that they’d “originally wanted to get into the studio . . . back in early 2017, but I think the band was kind of burnt out.” Part of the reason they eventually felt rejuvenated was the addition of Rudinger (The Faceless, White Chapel), as well as the drive to make Fluid Existential Inversions “more heavy, more challenging, more ‘weird,’ and bigger sounding.” As for the title, it came from a term they invented to express “the involuntary instability facing humans, and [how] all life is ever-evolving on Earth in these turbulent, uncertain times.” There’s even a nod to Candide by Voltaire, showcasing how Intronaut’ s music and songwriting are equally intellectual and dense. Bringing it all to life once again is producer Josh Newell, as well as guests Ben Sharp (Cloudkicker) and Kurt Ballou (High on Fire, Converge).

Fluid Existential Inversions undoubtedly sees Intronaut firing on all cylinders, and it wastes no time exemplifying that via the one-two punch of opener “Procurement of the Victuals” and “Cubensis.” The former is a fifty-five-second outburst of cathartically chaotic syncopation, off-kilter six-string strikes, and lightening fast fingerpicking as a backdrop. Following a quick authoritative voiceover, the latter explodes with mathrock precision and determination, leading to an influx of erratic rhythmic changes, guttural basslines, and harmonious yet gravelly proclamations. It’s an infectious amalgamation of delightfully muddy aggression matched with soaring tones, sing-along melodies, calming transitions, and other erratic fluctuations that keep it ceaselessly ruthless, poised, and engaging.

Naturally, the rest of the LP is just as provoking, vibrant, and challenging. For instance, "The Cull" channels the holy complexity of Mahavishnu Orchestra and sundried bellows of Baroness into a gripping composite. In contrast, "Speaking with Orbs" is more pointed and transcendental with its overlapping melodies and arrangement, all the while conjuring the Mars Volta at their most celestially playful and proficient brilliance. There are also the soothing ethers of "Tripolar," the expertly juxtaposed Voivod-esque hellfire and Devin Townsend-esque oscillating mediations of "Pangloss," and the rhythmically wholly uncontrollable patterns of closer "Sour Everythings" (which ends on a curiously pensive coda).

It may have taken Intronaut just over four years to put out Fluid Existential Inversions, but it was well worth the wait. Not only have they lost little, if any, of their prior adventurousness, skill, and focus, but they continue to represent the best of what this kind of progressive metal can be. At its most unassuming, it’s downright purifying; at its most volatile and virtuosic, it’s still extremely welcoming and memorable. There’s no telling where Intronaut will go from here, but they’ll certainly take themselves—and us—further than ever once the journey starts.