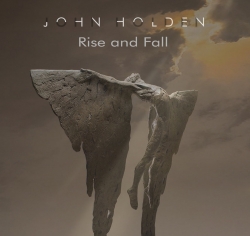 Rise and Fall likely outdoes its precursor in terms of drive, cohesion, and rewarding significance.

On his 2018 debut LP, Capture Light, composer John Holden proved to be an immeasurably talented, valuable, and motivated musician. Employing the talents of artists like vocalist Joe Payne (The Enid), keyboardist Oliver Wakeman (Yes), multi-instrumentalist Peter Jones (Tiger Moth Tales), Jean Pageau (Mystery), and guitarist/bassist Billy Sherwood (Yes)—among others—to bring his pieces to life, his first outing nonetheless had a cherishable and consistently characteristic aesthetic. Thankfully, he more than maintains that promise on his follow-up, Rise and Fall. Arguably even more unified, emotional, and spiritually transparent than its predecessor, the album delivers all of the elements that, even after only one prior outing, have become beloved Holden trademarks. As such, it’s another fine example of his craftsmanship as both an accessible songwriter and intricate arranger.

Once again, Jones, Sherwood, Pageau, Wakeman, and Payne contribute to the creativity; in addition, keyboardist Vikram Shankar (Lux Terminus, Redemption, Silent Skies), singer Lauren Nolan (Our Destiny, alongside Shankar), drummer Nick D’Virgilio (Big Big Train, ex-Spock’s Beard), and singer Sally Minnear join other newcomers in the fold. Together—and with more help from lyricist Elizabeth Holden and mastering from Cosmograf’s Robin Armstrong—they help Holden fully realize his pretty reflections and wordless expressions regarding things like an 11th century Benedictine monk who "was the first recorded person to have attempted flight," battling addiction, the intersection of capitalism and classism, "cultural terrorism," and more personal inspirations. It can feel a bit samey at times, yes, but there isn’t a moment that doesn’t captivate and charm for one reason or another.

In particular, multifaceted opener “Leap of Faith” begins as a deeply transformative and luscious instrumental, with piano notes, horns, light percussion, woodwinds, and choral chants conveying something glorious beyond ourselves. It’s not long, though, before Jones adopts multiple roles as his recognizable bellows bring personable richness to self-reflective lyrics; near the end, the piece earns more layers and gusto, concluding with wonderfully rousing and introspective grace. It alone signifies why Holden is a special kind of musical architect, and fortunately, subsequent tunes (such as the exhilarating Pageau-led title track, the tender Nolan and Payne duet within “The Golden Thread,” and Minnear’s dynamically empowering “Heretic”) are just as beautifully life-affirming and ambitiously wide-ranging yet welcoming.

Elsewhere, the unavoidably mesmeric “Dark Arts” almost veers toward mixing World Music and progressive metal with its mystical ferocity, eclectic timbres, and sophistication; that said, it’s incredibly catchy at times, too, with some playful guitarwork that—as oddly specific as it may be to say—channels The Grateful Dead’s sublime “Terrapin Station.” As for the penultimate “After the Storm,” its sounds of rainfall and compassionately colliding strings give way to a lovely acoustic ballad (at its core, at least, as there are many other things going on) that sees Minnear and company challenging something like Renaissance’s “I Think of You.” It also works as a comforting but thrilling prelude to closer “Ancestors and Satellites,” whose initial sparse otherworldliness gives it its own flavor while simultaneously leading to a speckled and celebratory cumulation of all that precedes it (with every vocalists uniting for the cause).

Like many artists who’ve had such revered and substantial introductions, Holden probably felt a lot of pressure to deliver something just as special here and avoid the dreaded “sophomore slump.” It’s no small feat, then, that Rise and Fall likely outdoes its precursor in terms of drive, cohesion, and rewarding significance. There’s as much poetic and intellectual fullness in the lyrics as there is in the music, too, so every element is impressive and gratifying. If he keeps up this creative trajectory and ability to bring in so many talent people along the way—and there’s no reason to think he won’t—there’s no telling how magnificent his third release will be.