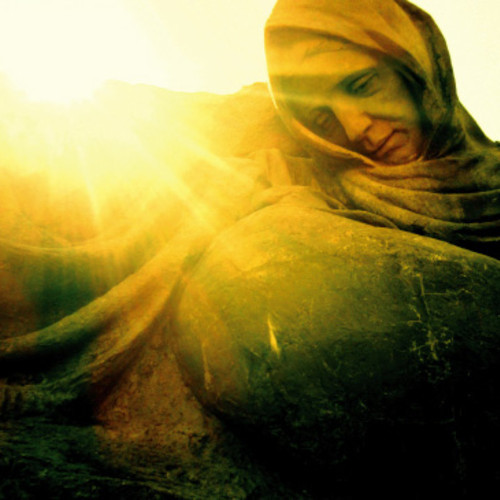 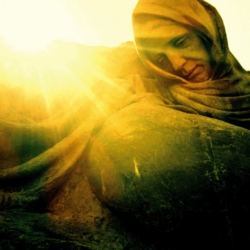 Bad-ass duo Amber and Ed release a super-heavy beast of an album.

Amber and Ed (otherwise known as Gazelle Amber Valentine and Edgar Livengood) trek into super-heavy, and sometimes impenetrable, territory on their latest album, laying down thick slabs of powerful drums onslaught, grimly grinding guitar noise, bleak to defiant lyrics, and baleful vocals that follow a tortured, tortuous path on the burdened beast that is “There Is Land Beyond the Volga”. 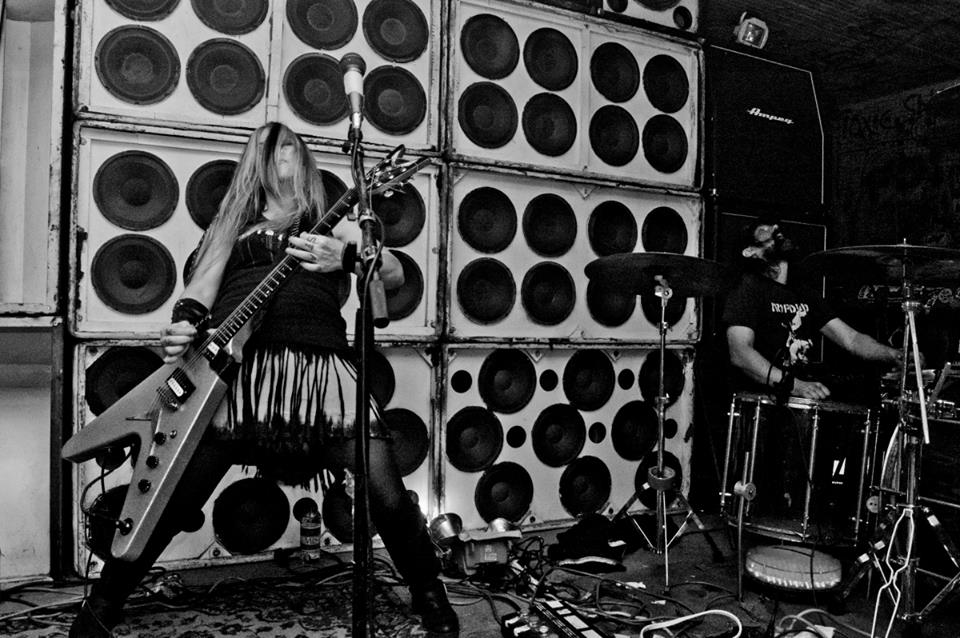 The album’s title, song titles, and some lyrics are in Russian and the concept focuses on the history of the city of Stalingrad which is now named Volgograd (and which was once nameless land where nomads roamed) and the Battle of Stalingrad.  While the album is drenched with a political and cultural outlook that is specific to Russian history, it can also be viewed in the broader context of how location, change, war, and survival affect us all.

It’s a bit difficult to take all that in, however, when the words are drowned out in the brutal mire of drums and guitar.  The songs with their complete lyrics and background information can be found at Jucifer’s official Bandcamp site.  The lyrics are rich and revealing in historical and emotional detail and add an edifying dimension to the music that isn’t evident upon first listen of “There Is Land Beyond the Volga”.

Still, the music mostly speaks for itself and the lyrics and background info are not particularly needed unless the listener has to know the exact words Amber is shouting out on each song.  So be prepared for a long voyage into a hardened, stark sonic landscape where the drums pulverize in slow (and sometimes fast) motion, the guitars roughly buzz and trudge through the sludge, and Amber (or is it sometimes Ed?) growls out her vocals from the bottom of the abyss.

The marching, mostly unchanging pace of “Queen of Antlers” is bolstered by jagged guitar undertow and generous use of cymbal crash.  The death metal-like vocals from Amber (or could it be Ed?!) are lifted up at times by added lighter, emotive vocals from Amber.  Near the end of the song the guitars go haywire and the vocals become even more direct and menacingly shouted out in a repetitive cycle that makes the listener feel trapped.

Amber and Ed rattle the cage on “White Lies” with a super-fast, flickering beat, but also with the same sludgy, doom-laden sound and unintelligible exclamations from Amber.  It all calms down in the middle section for a few seconds of respite before breaking down into punishingly noisy cycles of guitar, heavy drum tread, and words spoken in Russian.

“Shame” is lively to the point of enjoyable excitability with a royally pissed off Amber roaring against a clash of faster drum pace, cymbal smash, and guitar distortion.  She’s probably saying something really deep and compelling (and based on the lyrics at Bandcamp, she is), but her words are hard to discern.

A highlight of the album is the vehement and victorious “Fight Hard Live Free” with its detuned guitar grind and measured pace where the emphatic drums shadow Amber’s low register, malevolent vocals.  The song title becomes a manta burned into the brain – Yes, the words are clear on this one – and the sentiments of “Fight hard / - live free” resound long after the album is over.