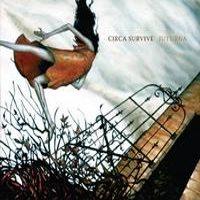 Album Review
Circa Survive
Label: Equal Vision Records
Reviewed by smalltownredemption
You stand on an invisible edge. Most who move around you are oblivious of the void that you stand before. But you feel it. You know if you take that fateful step off the edge and plunge into the abyss everything will change. The edge you once stood upon will slip away from you as fast as the wind stinging your cheek and it will never rest under your feet again. You also know that if you turn back to the safety of solid, secure and oh so familiar ground you will forever regret not taking the leap of faith you so desperately wanted.

Everyone stands on the edge of a life changing moment at least once in their lives, some more. These choices define what we do and make us creatures of choice, not just destiny or fate. Some are too timid to make them lacking the courage to see what awaits them at the bottom of the choice. Some leap without concern not comprehending the magnitude of their choice. Most stand on that edge and make that choice past the mind straight to the heart. If you had been in Arizona's terminal one day in 2004 you would have found, standing upon his own edge, Anthony Green, a man who had everything going for him mainly in the form of the band Saosin that was quickly gaining notoriety on the west coast, far from his native Philadelphia. You would find him on a lay over, returning west from an intentionally placed dental surgery that had him creating music with his old friend Colin Frangicetto. You would find him with his own choice. Return to the ever-sunny west and fall back into rank with his band where his heart did not truly lie, or take that unsure step off the edge and buy a return ticket to his home where a new beginning could flourish. This was his choice. This is Circa Survive.

Juturna carries the weight of this decision firmly on its shoulders and with it the whole bands decision to go at it together. This story is not lost on the sonic power of the album. From the outset Circa Survive shatter any doubts that the choices they all made were the wrong ones delivering a fresh sound that is their own not just a spliced together version of their former incarnations. Lead single Act Appalled arguably delivers the album strongest punch but it is not alone. The whole album flows together fluidly creating a complete piece that is reminiscent of a time when you had to stop an albums journey only to turn the record over and reset the needle. Green's voice carries on the tradition of turning a new leaf by giving a performance of high confident tones that convey the passion the music deserves. The album carries itself to conclusion with it's secret song that adds to the trend of a secret song that deserves to be played through each listen as it is an extension of the album not just a funny afterthought.

Circa Survive is the product of true passion and Juturna only mirrors this to deliver an experience that will only bring them justification of their choices, and it stands as testament that, the fall that lingers under your extended, testing foot is a risk worth taking.

Wires In The Walls