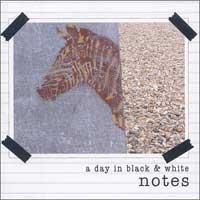 Album Review
A Day in Black and White
Label: Level Plane Records
Reviewed by smalltownredemption
All music dies. Grunge is dead unless you class Nickleback as post but my body revolts against such ideas. R'n'B doesn't even take a small part from it's origins to create another gag inducing genre. It seems only a very few styles hold fast over the years weaving in and out of the human conscious. Hip-Hop would arguably be one but I believe it is still too new a medium to count. Another would be Punk rock. Many attributes make up the success story of Rock's upstart cousin but for me the most important is its adaptability from generation to generation. From The Ramones to Black Flag. The Descendants to NOFX. Refused to Thrice. Even though the bands today sound different the sensibilities and long legacy of Punk remains strong, pumping through their veins. It's this change, while keeping true to its roots, that makes Punk as important and undeniable today as it ever has been. This is the embodiment of A Day in Black and White.

Hailing from D.C. ADIBAW come from an area steeped in Punk rock history, a fact they are ever aware of. And in true D.C. fashion they have been keeping with tradition with their previous releases. With a line-up change and a few tweeks here and there, Notes is so much more. Building on the success they have had with their unbridled energy and gusto ADIBAW have slowed the motion enough to deliver a truly memorable work.

"We started as louder and heavier and after some reevaluating and experimentation we really hit a turning point." Explains Vocalist/Guitarist, Daniel Morse. At heart ADIBAW may truly be rooted with those who come before but at the same time they have infused their sound with more diverse sounds like Fugazi and Sonic Youth giving Notes a truly unique and memorable voice.

"With the commercialization of punk, records have become products rather than experiences. I think it's terrible for a band to keep writing the same record and I hope people will like Notes because we took risks and tried new things." Daniel Morse.