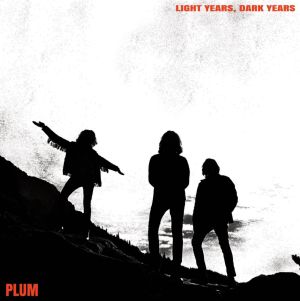 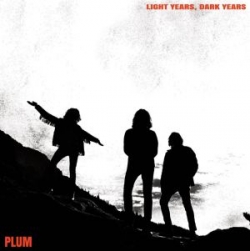 1960s-influenced, yet modern psych-rock band Plum get tantalizingly trippy and rousingly rocky on its debut EP.

EP opener “Light Years, Dark Years” blasts through with a blues-rock smolder as kinetic drumkit acrobatics vie for prominence with hard rock and distorted guitar riffs.  The emphatic beat and gritty guitar grind propel the tune forward as Jake duskily proclaims amid the tumult.  There’s an interesting, speedy break that comes out of nowhere near the end, piling on a start-stop rhythm and Jake’s quickly intoned, self-assured lines of “I’ll say what I want to say… / and I’ll see who I want to see / They will remember me.”  The EP’s titular song is memorable, indeed.

Hypnotic next number “Cosmic Vice” slows it down with aurally psychotropic, keyboards-derived sounds, cymbals tick, a steady beat, and Jake’s drawn out vocals.  He declares “It’s easier to fake what I’m feelin’.” against the densely textured, mind-bending sonics of trippy reverb and wavering organ notes.  The slow-burning atmosphere builds up to a conflagration of guitar lines and more prominent organ notes with Jake reassuring the listener that “It’s alright to be in your head…”

A “Lucy in the Sky with Diamonds” vibe floats hazily through “Drip” which treads with a measured pace, but then unwinds with echoed vocal reverberations and strutting distorted guitar riffs.  Squelchy guitar lines and organ notes zig-zag through the tune while Jake sing-talks in a lighter, but still narcotic tone that “Lava flows like candle wax in winter.”  A cycling refrain of guitar, shaken percussion, and smacked drum beat start off “Love Is In The Air” with Jake coming in on a delicate high, asking “What’s it all about?”  Sixties-style organ notes rub up against modern guitar grind and drum dynamics on the driving chorus.

“Hypanagaga” ends the wild and captivating ride of the EP with melodic, strung out harmonies, shaken percussion, swaggering guitar riffs, organ trills, pronounced drum hits, and Jake droning “So high / Hallucinating the sky / Come down…”  Light Years, Dark Years leaves the listener on a 60s-steeped, psych-rock high long after the EP is spun and done.