John Linger on lead vocals and bass; James Cubit on vocals and guitar; and Nicole Pinto on drums 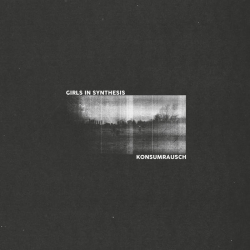 London based band Girls In Synthesis bring sinister tones to their own brand of gothy industrial punk!

When I heard the name Girls In Synthesis I was expecting maybe jangly indie rock or maybe something synthy that was female lead. Instead it’s heavy grimey industrial punk with a vocals that are somewhere between Johnny Rotten and Keith Flint of Prodigy. Musically the project is a little bit Nine Inch Nails, a little bit Death Grips and some KMFDM and Ministry thrown in. Track one “Pulling Teeth” stretches on for over 9 minutes with ambient tones that are eerie like we’re about to launch into an Aphex Twin song and then part 2 comes barreling in at the 7 minute mark with a distorted bass guitar firing like an automated drill. At times it’s more appliance noise than music, which is what gives it an industrial punk edge as the vocals repeat “No cure for pulling teeth”.  Track 2 is closer to Death Grips in that it has more of a dance beat than the more industrial feel of track 1, but with a dissonant guitar over sinister driving bass progressions.

Every track has a palette of gloomy synthetic tones that set the mood for this goth punk epic. The consistency and cohesion comes from the driving bass tones and shouted vocal on every track. At moments I hear Bauhaus and more classic goth influence but it also has tones and production that help it feel more modern. I’m guessing live Girls In Synthesis sounds something like Atari Teenage Riot and it feels of that 90’s era throughout most of the 5 song mini- album “Konsumrausch”. If you grew up in that 90’s era of dark industrial rock that seemed to go away this is your chance to re-live that excitement of driving industrial goth that you’ve been missing. Clocking in at just 22 minutes this album doesn’t overstay it’s welcome and leaves the listener wanting a re-listen as soon as it ends.