Los Angeles and Montreal based trio, American Lips Thrill Us With ‘Waste Of Crime’ 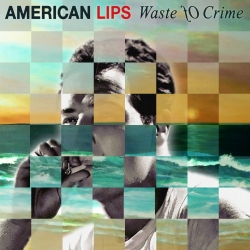 Although not quite avant-garde, Waste of Crime is ripe with sharp synth laden beats. The 80's punk influence can be heard in certain elements across the tracks, which makes sense. "I’d never heard any punk music before and the impact it had on me was huge," Popovich tells of being gifted a mixtape as a kid that introduced him to the The Misfits, The Ramones, and The Buzzcocks. At the same time, the three tracks on this single are definitely danceable, particularly the extended dub remix "Labor of Dub." "Labor of Dub" has the earmarks of a song you might find on an obscure 80's Devo record, but with a modern spin, making it hard not to nod your head to it.

The track "Wasted Time" has a mid aught's feel that makes me think of The Dandy Warhols. Popovich sings with a laissez faire slant that fades confidently into the soundscape of guitars and synthy horn sections, reminiscent of music I grew up listening to and am quite fond of - making this my favorite track on the single.

American Lips proves adept at blending different breeds of music to create something that evades traditional genres. Waste of Crime is an innovative effort to be proud of - looking forward to what's next on their horizon.