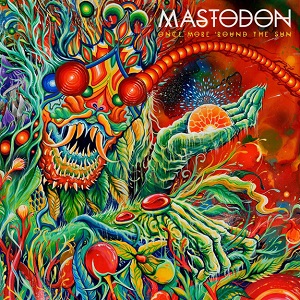 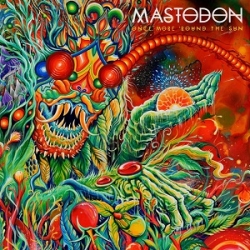 Sure, it lacks the experimental madness of ‘Blood Mountain’ and the musical/conceptual perfection that makes ‘Crack the Skye’ an absolute masterpiece, but it’s still a great ride, and that’s all that really matters, isn’t it?

There are several elements that make American sludge/progressive metal quartet Mastodon stand out. First and foremost, their riffs and rhythms are always hypnotic and, perhaps even more extraordinarily, fairly idiosyncratic. Of course, the fact that three out of four members sing (and have dissimilar tones at that) really helps give their songs a lot of vocal variety. Also, they’re interwoven guitar counterpoints definitely provide unified yet awesome transitions between their dramatic verses and epic choruses. All in all, fans expect these factors to come into play on each Mastodon release, and fortunately, their sixth record, Once More ‘Round the Sun, packs them in tightly. It’s not the group’s strongest effort to date (Crack the Skye still reigns supreme by a mile), but it nonetheless kicks ass and pulls us in as only Mastodon can.

Stylistically, the band says that this LP is a continuation of what The Hunter introduced (which, to be fair, felt like just a blend of its two immediate predecessors). At times, the record approaches the heaviness of Remission too, which is interesting; in this way, it’s less overtly “prog” than their past few outputs, choosing to decorate its central motifs subtly rather than venture into dizzying displays of virtuosic time signature changes (a trademark that I adore, just to be clear). All of these descriptors culminate in an album that’s possibly more straightforward than usual but undeniably gripping, mighty, and catchy anyway.

Album starter “Tread Lightly” begins, well, lightly, with a quiet acoustic guitar strums giving way to an explosion of crunchy chords and fiery percussion. Bassist Troy Sanders’ scratchy Viking vocals blend well with the warmer, more colorful voice of Brent Hinds, especially during the chorus; meanwhile, the instrumentation dances around them marvelously, creating an entrancing journey all the way through. Afterward, “The Motherload” and “High Road” instantly prove to be among the most melodically enticing pieces here, with engaging, anthemic vibes permeating every second. In addition, their core riffs complement the singing particularly well, making the duo instant classics in the Mastodon catalogue.

Hinds steals the much deserved spotlight on the title track, making it feel inherently eccentric and passionate. Rhythmically, it’s a powerhouse too, and the effects on the instruments add nice flair. “Chimes at Midnight” is perhaps even more schizophrenic, intricate, and bombastic, yet its dynamic shifts (a technique that Mastodon is known for) keep it from being overwhelming or too noisy. Next up, the interlaced vocal puzzle that adorns “Asleep in the Deep” is both surprising and seamless, demonstrating a risky yet beneficial maneuver in their method. The fact that Mastodon is implementing that style even slightly (and thus, evoking bands like Spock’s Beard and Gentle Giant) is very cool.

“Aunt Lisa” also offers a twist in the form of a chant from female punk trio The Coathangers, whose “Hey! Ho! Let’s go! Let’s get up and rock ‘n’ roll!” adds a unique coating to the palette. Its inclusion is probably the most audience-polarizing decision the band makes on Once More ‘Round the Sun (some listeners will probably dislike it), but I find it refreshing and commendable. “Ember City” also has a piercingly affective chorus, allowing it to etch itself in your mind after it’s finished playing, while “Diamond in the Witch House” provides a grand finale for the disc. It also opens with some acoustic guitar, connecting it to “Tread Lightly” and making the whole journey feel cumulative. As you’d expect from its placement and length, it’s arguably the most ambitious and multifaceted gem here, with plenty of segues seducing you until it dissipates in the aftermath. It’s a grand way to conclude.

If there’s one overarching fault in the record, it’s a noticeable lack of diversity amongst the tracks. More so than on any Mastodon album since Leviathan, these selections feel concretely similar to each other, maintaining an analogous aesthetic and balance that prevents each piece from feeling significantly individualized. On the other hand, though, this consistency allows Once More ‘Round the Sun to flow impeccably from beginning to end, with each composition’s essentials adding spice to the grand scheme (like chapters playing their part in an epic novel). A lot of other albums with the same “flaw” wind up feeling annoyingly tedious, so it’s remarkable that Mastodon can still develop an unspoiled formula to avoid that outcome.

Song for song, Once More ‘Round the Sun may be weaker than its last three precursors (although I probably like it more than The Hunter overall), but the fact remains that I can’t stop listening to it. Every beloved element I mentioned earlier continues to thrive wonderfully, creating a chemistry that feels distinctly like Mastodon (and distinctly not like anything else). Sure, it lacks the experimental madness of Blood Mountain and the musical/conceptual perfection that makes Crack the Skye an absolute masterpiece, but it’s still a fucking great ride, and that’s all that really matters, isn’t it?

*Also, you can't deny how awesome that album cover is, can you?