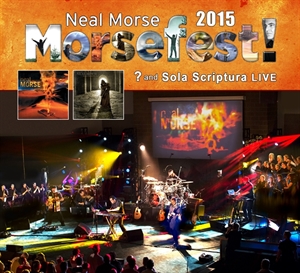 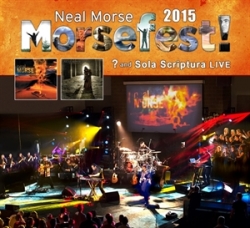 Like just about every other Neal Morse live set, Morsefest 2015 is a must own not only for his devotees, but for anyone who likes symphonic progressive rock.

No one puts on a show like American progressive rock legend Neal Morse. Revered for his catchy and poignant songwriting as much as for his intricate, extensive, and lively arrangements, he and his crew never fail to match their studio ambitions with equally striving concert recreations (that often include enactments of entire albums, miscellaneous fan favorites, visually striking accompaniments, and several guest players). Fortunately, his newest offering, Morsefest 2015, is no exception, as it keeps that  trend going and serves as a perfect follow-up to predecessors like last year’s Alive Again and 2015’s Morsefest 2014. In particular, the two-disc Blu-ray finds The Neal Morse Band (which is completed by drummer Mike Portnoy, bassist Randy George, guitarist/vocalist Eric Gillette, and keyboardist/vocalist Bill Hubauer) reproducing two of his most adored solo efforts—2005's ? and 2007's Sola Scriptura—and more with help from an array of additional musicians. The result is roughly five hours of brilliant music and endearing vibes that no fan of Morse should miss.

Accompanying the core quintet throughout the show is an elaborate “prog orchestra” consisting of “live strings, a 5-piece horn section, and a 14-piece choir.” In addition, former Spock’s Beard drummer/singer Nick D'Virgilio and guitar icon Phil Keaggy appear on certain entries. Of course, Morse’s shows are known as much for their visuals as for their audio, and in that respect, Morsefest 2015 displays “the most elaborate lighting set-up [he] has ever used, constructed specifically for this event [and] designed by Ryan Proplesch. A video graphics track, projected on three screens, was created by media artist Christian Rios to illustrate every moment of each song. Live dancers provide further visual interpretations, adding a dimension to the performance . . .” As you’d expect, this set does an impeccable job of capturing everything that made the event so special.

Rather than start the first disc with ?, the group pulls out several other gems, including three from their first official record together, The Grand Experiment: “The Call,” “The Grand Experiment,” and “New Jerusalem” (which, to be accurate, was a bonus track).  Naturally, they sound as great as they do on the actual record, if not even more dense, with various differences that keep them familiar yet also surprising (like the standout inclusion of the choir into the end of “New Jerusalem”). It’s really incredible how faithfully they’re able to capture every nuance of the original arrangements. As wonderful as those are, though, the true joy comes from seeing the band play more unexpected selections, such as an Spock’s Beard’s “Go the Way You Go” (during which Gillette, Hubauer, and even Portnoy provide gentle backing harmonies), Jim Webb and Richard Harris’ polarizing yet iconic “MacArthur Park” (which is obviously far more embellished and virtuosic, with Hubauer fittingly taking the lead vocal role), and, as Portnoy points out when he introduces it, Morse’s first solo epic (and a song that he never plays live), “A Whole Nother Trip” (from 1999’s Neal Morse). The latter addition finds the “prog orchestra” really helping flesh out the music with an assortment of warm timbres; also, Keaggy stops by to play a really tasteful solo.

As for ?, it begins with a string overture and thematic cinematics to enhance the sense of performance art. Of course, the film continues throughout the recreation, and every member gets a moment or two to shine as they bring the concept album to life. Morse has his pastor, Steve Farmer, recite narration during “Solid as the Sun,” which is a nice touch since Morse credits him with making Morsefest 2015 possible. Later, he introduces “Outside Looking In” with a moving personal story, and there’s a lovely communal air to “The Temple Of The Living God (Reprise),” as well as added horns and strings to make it even more full-bodied than it was initially. All in all, the first disc of Morsefest 2015 is simply remarkable.

Like the previous sequence, the second set starts with blue lights interrupting the darkness; however, in contrast to it, the main course—the full album—is up first, and to be blunt, Sola Scriptura has never sounded better.  Aiding the theatrical atmosphere are flashes of colored lights that, at certain points, make it look like orange bolts of lightning are attacking the players. (Trust me, you’ll know what I mean when you see it.) Near the end of “The Door,” shots of candles are layered over the concert, and actors dressed in brown shrouds move across the stage. In this way, Sola Scriptura receives a more theatrical treatment than ?. As for the rest of the record, it’s executed with equal expertise and flair; for instance, “The Conflict” features bolded lyrics on the screen, while both “Heaven in My Heart” and “The Conclusion” include two interpretive dancers.

The rest of the night begins with “Waterfall” (during which the whole band pulls a CSNY by playing acoustic guitars and/or sharing vocals) and, in one of the most inherently poignant and audience-pleasing moments of the night, finds D’Virgilio playing percussion on Spock’s Beard classic “At the End of the Day” afterward. Luckily, he sticks around to sing “Wind at My Back” alongside Neal; it’s an extremely touching rendition considering that 2002’s Snow (from which the track originates) saw Morse officially leave the ensemble he founded about a decade prior. In other words, don’t be surprised if you tear up watching it. Fittingly, the show ends with a medley of Transatlantic’s The Whirlwind, and it kind of feels like an intrinsic celebration of Morse and Portnoy’s friendship since they’re both in that group, too. Not only is this disc as good as the first, but it’s arguably as great a set as any other Morse has done.

As exceptional as the music and visuals are on Morsefest 2015, the extra ingredient that makes it—like all of Morse’s concerts—special is the banter between the members, the discussions about many of the songs, and Morse’s willingness to address, and even enter, the crowd at certain points. Whereas many artists put a distance between themselves and their crowd, The Neal Morse Band doesn’t; rather, they really make it feel like a shared musical and spiritual experience. In this case, they’re literally a mere few feet from each other, so there’s a ton of interacting going on, and it’s endearing to see how genuinely enthused both sides of the show are about each other.

Naturally, the release also comes with a behind-the-scenes documentary, and it’s as in-depth and inviting as you’d expect. For such incredible musicians and songwriters, the quintet is surprisingly humble and open about their processes, bonds, and the like. There’s plenty of insightful interviews and candid shenanigans to keep fans both amused and educated, so it’s definitely a valuable supplement to concert.

Like just about every other Neal Morse live set, Morsefest 2015 is a must own not only for his devotees, but for anyone who likes symphonic progressive rock. After all, you get enhanced takes on two of his best albums and many of his greatest ancillary material, too. (Really, it’s almost worth the price of admission alone just to see he and D’Virgilio together again.) Just as last year’s The Similitude of a Dream proved how consistent The Neal Morse Band still is in the studio, Morsefest 2015 stands as another staple of how stable, committed, and potent they are live. Don’t miss this one.

The Velvet Hands - ‘Sick of Living’