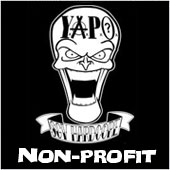 If you have read my music reviews in the past, you know I not only consider the music, but also what the band does for our scene. Let's face it, we don't have any great punk rock stars coming out of the SGV, but as far back as the early 80's, there has been a core punk rock scene here. That's because the punks in our scene know that if we don't do it for ourselves, no one else will. No band exemplifies this better then YAPO. I first saw YAPO around 92-93, by then they were already scene veterans. According to their bio they have been doing this shit since 83. From the gigs I've been to, the typical YAPO show is in a backyard with a bunch of crazy drunk fuckers going ape shit. YAPO plays loud and aggressive, but not sloppy; these guys got their shit down. My high school friends used to ask James and the gang to play our gigs; they were always cool and down to play anywhere, anytime.

YAPO has a few 7" on the Beer City label, but for their full length release NoN-ProFiT they did it on their own. Its 19 tracks of SGV style Hardcore. The songs are fast and furious, in the vein of bands like Discharge, the Exploited, GBH, etc... What makes YAPO different is that they not only sing about social injustice (with songs like Dead Cities or Imminent Doom) but also about personal injustice. My favorite track is probably Believe In Yourself. Its songs like that which let you know these guys aren't full of shit, they fucking lived it for years.

Yes, the CD is fucking awesome and you can get it directly from the band here on Rebel Noise, but like always, do yourself a favor and pick it up at the next YAPO show.

Sound the Alarm - ‘Stay Inside’

Every Time We Fall