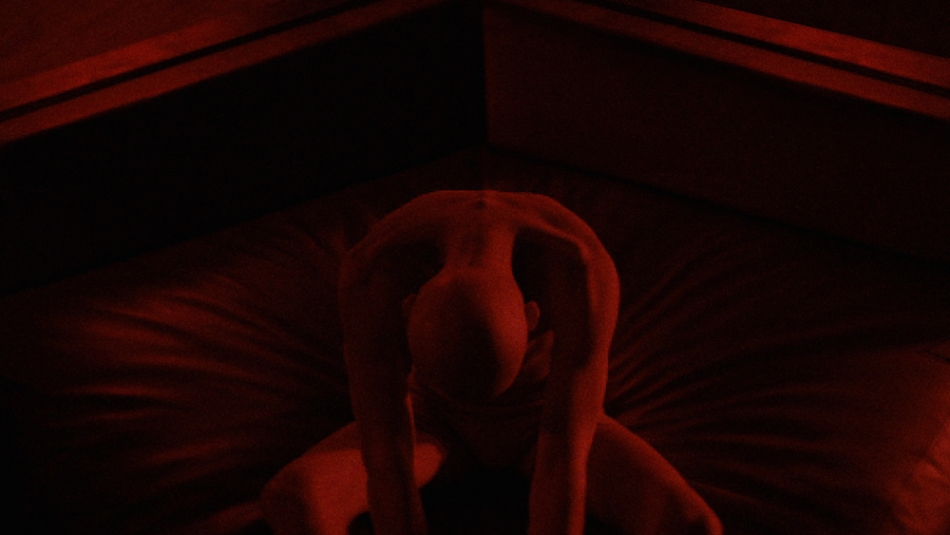 Set in a hyper-stylized dystopian future, Eddie Alcazar’s film Perfect leads with Garrett Wareing, an unnamed adolescent (referred to as Vessel 13 in the credits) who gets sent off to a luxurious retreat by his mother (Abbie Cornish) to help aid with the vivid nightmares and murdurous flashbacks of his girlfriend’s mutilated body he’s been having. Wareing gradually cuts out chunks of his flesh, replacing them with dozens of crystal-like prisms throughout his body in order to rid himself of evil and achieve a state of perfection. While the film remains visually distinct, Perfect’s intent of waxing philosophical follows a hazy and ultimately directionless path.

Providing a strong eye for captivating visuals, Alcazar’s use of rich colors sets the tone for the film, from clear and stark whites inside the limo as Cornish accompanies her son to the retreat, black and white segments of sacrificial visions and washes of deep, ominous reds as we near Perfect’s conclusion. Produced by Flying Lotus, he also provides experimental pulsations which make for a hypnotic score and adds to the film’s jarring ambience. All those elements combined might make for an impressionable music video but unfortunately not for a full length feature.

Trying to piece together Perfect’s multiple voiceovers feels like a game in futility, an attempt at existential ponderings that fall flat and dry. Through Wareing and Cornish’s communication via video-calls we learn that he’s discouraged to get involved in romantic entanglements lest it get in the way of his spiritual journey, but also possibly as a relief for the audience from the character’s interactions entirely void of life and complexity. Strewn throughout the retreat are airbrushed-looking models, vapidly taking selfies with an air of boredom lingering on their faces while Wareing’s attraction to one of the women, Sarah (played by Courtney Eaton), ricochet from sparse dialogue to professions of intense attachment. For the duration of his stay Wareing’s tormenting thoughts begin as indistinct and haunting images, an enduring obstacle that stands in the way of his personal transformation, then regrettably crosses over to shock effect territory. If Alcazar had the foresight to express some sort of message with these scenes it might have countered its shallowness with a degree of substance, but instead they feel like heedless snapshots of what a thoughtful cinematic piece should look like. Perfect takes interesting concepts of our society’s expectations of identity and self-improvement and aimlessly turns it into something self-indulgent and meaningless.