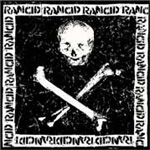 On the recently released "Theme From A NOFX Album," Fat Mike sarcastically sings about becoming an old punk: "We're professional punkers, we come from the suburbs/ After 15 years we're still havin' fun/ Now we're over 30, not looking so purty, at least we got a beat up accordion."

Tim Armstrong, Fat Mike's label mate and punk rock peer, looks at aging a little differently. Unlike NOFX, Armstrong and his band, Rancid, take the past and reinvent it, making it seem better than it actually was. For Armstrong, getting kicked out of high school for having a Mohawk is still one of life's shining moments. Like a Quentin Tarantino movie, Armstrong uses Rancid to make nostalgia seem cool.

No, Rancid's self-titled album does not break any new ground. Instead, each track pays homage to old heroes such as the UK Subs, Crass, and the Germs. From the Sex Pistols to the Offspring, Rancid borrows from the best found in punk rock's twenty-five year history and rolls it all together into a twenty-two song package.

Just as Joe Strummer did in the Clash, Armstrong takes his lyrical themes from everywhere. On Rancid, Armstrong and company sing about characters in Chaucer's " Canterbury Tales," the god Loki from Norse mythology, current politics in third world Rwanda, and 50's fall guy Charles Van Doren from "Quiz Show." However, Armstrong is strongest when he sticks to topics close to home: bashing corporate LA yuppie scumbags ("Antennas"), memorializing a departed East Bay homeboy ("GGF"), and keeping love's flame alive while on the road ("Black Derby Jacket").