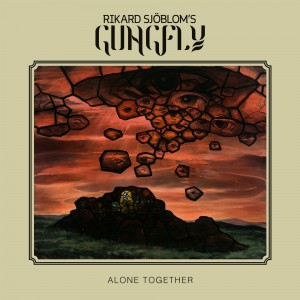 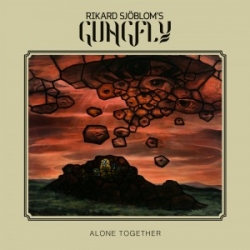 Like everything Sjöblom touches, Alone Together is an essential entry into both his catalog and the realm of modern progressive rock in general.

It’s been less than two years since inimitable Swedish singer/songwriter/multiinstrumentalist Rikard Sjöblom (Big Big Train, Beardfish) released his last Gungfly opus, Friendship. A deeply complex and vibrant—yet personal and catchy—sequence, it further solidified him as one of the best vocalists, musicians, and scribes in progressive rock. Obviously, it also raised expectations for what he’d do next, and thankfully, Alone Together doesn’t disappoint. In fact, it feels very much like a companion to Friendship—even their covers are somewhat similar—so while it’s a bit more streamlined and hard rock-oriented, it nonetheless contains everything that makes Sjöblom such a characteristic, consistent, and cherishable artist.

Once again, Sjöblom is joined by bothers Petter and Rasmus Diamant (drums and bass, respectively). Thus, he handles both guitar and keyboard duties with his typical adeptness. In the official press release, he reflects: “It was a lot of fun playing both keyboards and guitar because I had come up with a lot of nice parts. . . . I knew early on that I wanted to make the album with the brothers on drums and bass—luckily, they were very up for it!” As for the slightly scaled-back production and arrangements, he adds, “I didn’t want to smother the production with layers upon layers of keyboards and bells and whistles,” choosing instead to “keep it prog rock with the focus on ROCK. I wanted every instrument to mean something in the mix.” Lastly, he reveals that the title refers to him “being sick of the sugar-coated reality of social media, where we think everyone else is living fuller and happier lives than ourselves just because they happen to post a happy picture whenever they do something.” He’s certainly on to something with that sentiment—just read Sherry Turkle—and as usual, he conveys his messages and meanings with an abundance of memorable melodies and magnificently developed arrangements.

“Traveler” adheres to his penchant for kicking things off with energetic yet emotional compositions. Specifically, he continues Friendship’s focus of confessional longing for connection with the opening line: “Time has come to fight or flight, but / I’m losing touch with me / I’m losing touch with you, too.” A driving bass line guides fervent percussion, quirky but moving keyboard and guitar intersections, as of course, Sjöblom’s impeccably alluring and rich singing. At roughly thirteen minutes in duration, it also ebbs and flows through modulations and segments as seamlessly as ever, keeping you glued to every playfully relatable movement. Be it the gentler passages or the aggressive ones—both types are Sjöblom staples, after all—“Traveler” is a familiar but still exhilarating and charming way to begin.

Afterward, “Happy Somewhere in Between” harkens back a bit more to the peculiar timbres and irregular change-ups of classic Beardfish, whereas “Clean as a Whistle” is a mostly tranquil acoustic ode dominated by peaceful vibes, luscious tones, and slightly jazzy tendencies. Sjöblom always prioritizes his songwriting over his instrumentation, and this track is a perfect example of that (although its fired up conclusion fits right in). From there, the title track—"written from the perspective of a parent whose child is in a psychiatric ward because she's lost contact with reality”—is as moving and fetching as it is intricate and multifaceted, while the penultimate “From Afar” is another acoustic ballad (even more stripped-down and straightforward than “Clean as a Whistle”) that you can’t help but sing along to. With closer “On the Shoulders of Giants”—slightly longer than “Traveler," allowing Alone Together to be bookended by two relatively epic pieces—he offers a tour de force of temperaments and techniques as he reflects on his artistry and inspirations. It really is an all-in-one showcase for what makes Gungfly special, and his musical and lyrical nods to Frank Zappa, in particular, are quite endearing. (He’s routinely worn Zappa’s influence on his sleeve—especially on “Abigail’s Question”—so it’s interesting to hear him formally humbled by the late composer’s genius.)

Like everything Sjöblom touches, Alone Together is an essential entry into both his catalog and the realm of modern progressive rock in general. Granted, if you’re already a fan, you basically already know what you’re getting into, but that doesn’t make the experience itself any less wonderful (nor does it make the craftsmanship any less wonderous). To that end, how it compares to his other Gungfly collections is almost an irrelevant consideration since it achieves a greater purpose of enhancing his cumulative legacy. It certainly doesn’t disappoint, though, and it’ll no doubt satisfy devotees and impress anyone who makes Alone Together their first dive into Sjöblom’s colorful world.