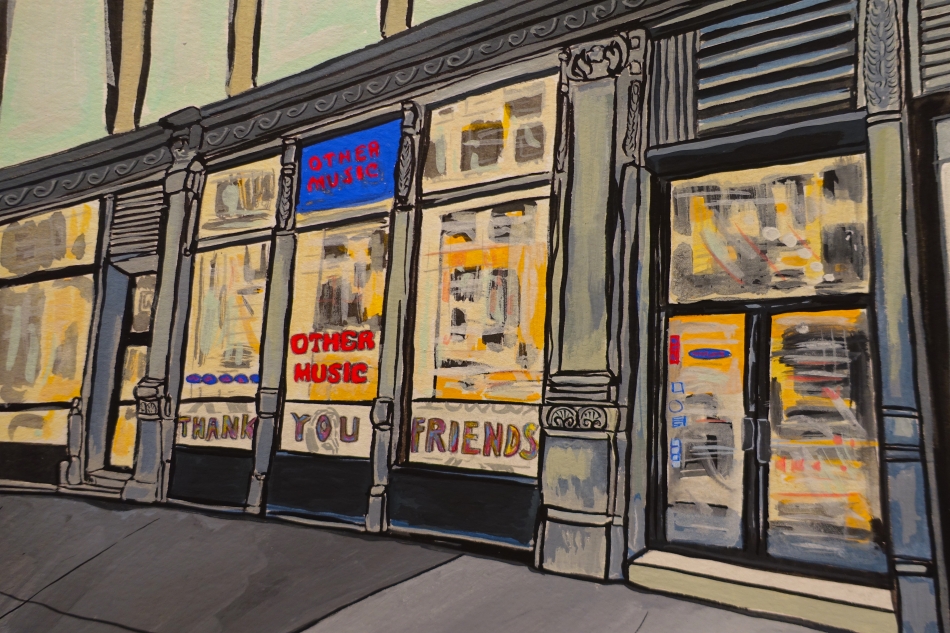 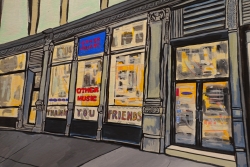 In our constantly altering digital age, consumers have resorted to convenience and mass media consumption, often within the confines of their own homes. A click on Spotify allows you to stream popular playlists crafted by a de-personalized algorithm that relies on play counts and analytics, or hearing about the latest music releases via online blogs lends itself to listening and subsequently skipping from half of one opening track to the next, often exhausting a dozen artists in the time it would take you to fully process a single album from start to finish. With this rapidly paced culture inevitably comes the demise of physical media and physical spaces. Thriving and then dissipating in the span of 21 years, directors Puloma Basu and Rob Hatch-Miller’s documentary, Other Music, incorporates live performance footage, interviews and interspersed animations which bring to life New York City’s beloved record store, a burgeoning and influential cultural hub that was more than simply the sum of its four walls. Co-owners Chris Vanderloo and Josh Madell highlighted the importance of being intentional in everything they brought to the shop, from allowing artistic freedom and expression from their staff, forming personal bonds with their customers and, most of all, emphasizing the magic and energy that lies inherent within a physical community.

Opening its doors in 1995 in the centrally located Astor Place neighborhood of Manhattan, Other Music built itself up from scratch. From its subversive location across the street from a Tower Records store to their vision for which they came to arrange music genres on their shelves, the team consciously curated every aspect within their means as well as maintained an overflowing wealth of musical knowledge throughout their staff. “The rite of passage for a new clerk at OM was to start at [genre marker] IN, grab a legal pad, and write down every single band in every single section”, said staff member Nicole. Rather than pushing their own personal preferences, the employees would genuinely listen to the tastes and desires of a customer before recommending albums that they had likely never heard of while broadening their views to artists that may have been lost and forgotten.

Despite its small square footage came free and all-ages in-store performances from high profile or newcomer bands with an intimate audience in attendance to watch and pick up their latest album. Simply having your record stocked at the shop was considered prime real estate and an accomplished milestone. Local bands like Interpol and The National got their start with Other Music championing their sounds and aiding them in growing a fanbase. “I remember Other [Music] being the first place that gave [our album] a review and put it up and gave us our first name card”, said David Portner of his early Animal Collective years. “It was just like ‘yes, we made it, finally! That’s all I ever wanted.”

Yet with the record store’s uprising came an abrupt downfall with its altering clientele amidst the digital uprising in 2003. Conversations about obscure artists that once took place on the floors of Other Music began taking place in chatrooms and online forums. Aiming to stay relevant by opening an online MP3 store didn’t help sales as the staff began living week to week with even larger physical music stores closing down and corporate businesses cropping up in their place. Including exuberant performances by Yo La Tengo, Frankie Cosmos and Sharon Van Etten for Other Music’s closing party, the shop marked its last day open to the public on June 25th of 2016. “It’s a lot harder to put it together than it is to take it apart, huh”, laments Madell, watching as movers removed not only inventory that spotlighted all the artists they’ve come to know and love over the last two decades, but a space that amplified the innate and unwavering strength of the underground underdogs. Says Madell reflecting back at his time growing the shop with Vanderloo, “it’s a tough living, but it’s a pretty satisfying life”, an honorable mission statement we could all aspire to help guide us and our daily intentions.

Since the closure of Other Music and a period of unemployment, Vanderloo now works for the indie music distribution company Secretly Canadian while Madell runs a bustling Manhattan location of Trader Joe’s, a position that proves its significance in our community in light of our current climate within the global pandemic. Directors Basu and Hatch-Miller continue to state the ever increasing importance of buying physical vinyl and merchandise from labels and record stores to help sustain small businesses. “We are just music lovers in general, we do have a pretty big vinyl record collection, but we’re not anti-streaming […] having access to almost anything in your pocket at any time is a great thing for music lovers, although i’s definitely not a great thing financially for most artists.” Their hope is for independent music stores and venues to stay in business, eventually re-opening when it’s safe to do so and that the government proactively takes a stance in providing them with financial aid. “The CARES Act and the Paycheck Protection Program ultimately aren't going to be enough to save a lot of record stores, and live music venues are even worse off. All small businesses need more financial assistance, not just record stores, and venues desperately need Congress to pass the Save Our Stages Act.” Other Music’s emphasis on the inherent nature of tangible and artistic physical spaces being so precious and finite is perhaps the reason we still yearn for them and hold them dearly, as they arguably hold our most defining memories of our creative communities and our individually limitless spirits.

Distributed by Factory 25, Other Music documentary announces their wide digital release today to stream on Prime Video and Kanopy, and to rent or purchase on iTunes, Google Play, Vimeo On Demand and other digital platforms for viewers in North America.