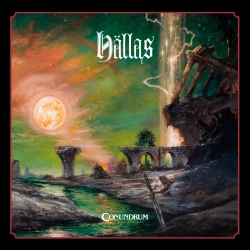 Conundrum makes Hällas even more essential and special as purveyors of this kind of imaginative and intricate throwback splendor.

With their first two LPs—2015’s eponymous debut and 2017’s Excerpts from a Future Past—Swedish “adventure rock” outfit Hällas did a fantastic job amalgamating drips and drabs of (to quote myself) “Goblin, Dungen, Wobbler, Black Sabbath, Mahavishnu Orchestra, Led Zeppelin, and Camel” into their own distinctive recipe of trippy, mellow, comforting, complex, vibrant, and hard-hitting aural delights. There’s a wonderfully vintage aesthetic that permeates the quintet’s work, conjuring 1970s rock, Canterbury, and jazz fusion classics in the midst of delivering a very relevant and modern sound.

Gratefully, their latest escapade, Conundrum, is precisely the follow-up fans should expect and exalt. It arguably never reaches the drastic dynamic and textural polarizations of its predecessor—in other words, its range of timbres and temperaments is probably not as extreme—but that consistency also makes it a more unified, welcoming, and poised work. In any case, Conundrum is another absolutely superb record that lovers of the band and style will undoubtedly worship.

Once again, Hällas consists of vocalist/bassist Tommy Alexandersson, percussionist Kasper Eriksson, keyboardist Nicklas Malmqvist, and guitarists Alexander Moraitis and Marcus Pettersson. Naturally, they see the release as the “final installment of their mysterious trilogy” that’s set during the Middle Ages (via a “cosmic ride through a parallel world”) and focuses on “seers, a knight on a quest for answers, and the fall of a once great city.” From start to finish, it’s a captivating, elaborate, and invigorating journey that unfolds with seamless allure and meticulousness.

Right away, the LP seems more nuanced and subtle than its predecessors. Rather than kick off with some bombastic retro hyperactivity, the brief “Ascension” rises as an ethereally and emotionally gothic yet futuristic sound collage that’s akin to what Arjen Lucassen (Ayreon) would do if he remade Camel’s The Snow Goose into the dungeon theme of an NES-style RPG from the Final Fantasy or The Legend of Zelda series. (Take a listen for yourself and tell me you don't hear it, too.) It’s quite gorgeous, elusive, and chilling, actually, as if it’s preparing you for the harrowing concluding chapter of an epic tale. Along the way, the more robust “Strider” incorporates that vibe into its synthy caverns and omniscient yet fearful harmonies; likewise, “Labyrinth of Distant Echoes” lives up to his name by channeling the sagacious angelic chants (and, it must be said, nearly identical rhythmic pattern) of Genesis’ seminal “Watcher of the Skies.”

Elsewhere, the band’s melodies and knack for mesmerizing trickiness shine brighter. In particular, “Beyond Night and Day” matches relatively gruff guitar licks and verses with soothing bass lines, exciting organ outlines, and sophisticated syncopation shifts. Later, “Carry On” is truly one of their most irresistibly catchy and tightly composed pieces ever, whereas the penultimate “Blinded by the Emerald Mist” is comparatively restless and challenging, ceaselessly moving in-between colorful agitation and lusciously starry tranquility with masterful diligence. Its final celestial notes bleed beautifully into “Fading Hero,” an engrossing finale that honestly borders on the sort of stadium rock glitziness popular in 1980s action movie montages. That’s not meant as a knock against it, of course, as it gives the track a prodigious sense of purpose and fateful resolve. There’s also a touch of ELP-esque showmanship and robotic narration that enhances its power and finality.

In some ways, Conundrum is Hällas’ most accessible and safe sequence to date; however, that’s unanimously meant as a complement, as it affords a palpable entryway for newcomers while also perfecting—rather than diminishing—the quintet’s ability to do what they do with painstaking attention to technique, cohesion, and resolution. Put another way, they’ve never sounded so united, inviting, and richly fluid in terms of crafting a collection that flows with a singular vision. As a result, Hällas is even more essential and special as purveyors of this kind of imaginative and intricate throwback splendor.