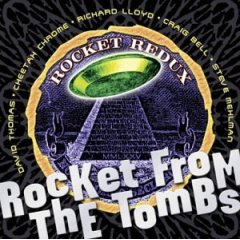 Album Review
Rocket From The Tombs
Label: Smog Veil Records
Reviewed by Larry Lugz esq.
The infamous and notorious Cleveland based art punk legends, Rocket from the Tombs release their first-ever studio album. Granted, the band broke up in 1976, have released several, albeit bootleg, releases over the past 30 or so years, went on to spawn the seminal punk pioneers, Pere Ubu and The Deadboys (both of whom are legendary in punk rock history) and have influenced everybody within the realm of punk, rock and metal (Rubber City Rebels, Guns & Roses, Humpers, "riotgun.", and even Metallica). Not bad for a band that never really left Cleveland. Dave Thomas (aka Crokus Behemoth) sings and wails in his monsterous caterwaul while guitar legend Cheetah Chrome handles six-string terrorist duties all in perfect chaotic timing of a solid and beefy rhythm section. It's about time that RFTT put out these already classic punk songs the way they should have been done 3 decades ago. They set the standard then and now they reinvent the standards pushing the envelope one step farther. Brilliant! A history lesson that still sounds contemporary and brilliant today as it did then. Highlights include the infamous "Sonic Reducer RFTT" and the classic "Ain't it Fun", both wildly intrinsic and with a touch of classic bluesy punk to set it apart from the pack. An Awesome epic.