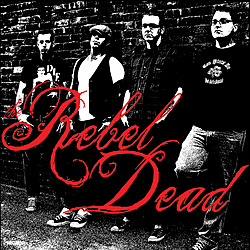 To be honest, I have put off reviewing this record for weeks. Why? Well I have listened to this record a number of times and I am trying to find something positive to say. Unfortunately for The Rebel Dead, I don't.

What can I say that's positive about this record? The recording sounds great.

This band plays that sort of punk/rockabilly/rock 'n' roll style that has been re-hashed so many times that none of us could ever keep count.

With all due respect to the band, the songs are solid, the playing is very good, but the problem is that nothing sticks. None of these songs stuck in my head after listening to the record a bunch of times. I think that's it! I've heard this 4/4 beat rock 'n' roll stuff too many times.