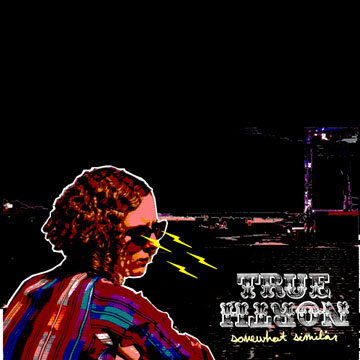 Album Review
True North
Label: No Idea Records
Reviewed by Janelle
Yes, I suppose after having this record since February (so early that No Idea sent a burnt copy to me in a plastic bag with no listing of song titles...), it's about time to give this FINE record a review. And truly this, True North's eight-song follow-up to their 'Put Your Nightlife Where Your Mouth Is' EP, is a masterful piece of inventive hardcore. Featuring members of Twelve Hour Turn, Palatka, and Strikeforce Diablo, this Gainesville four-piece are sure to impress anyone into chaotic, slightly dissonant, urgent-sounding hardcore.

Much of the immediacy and innate nervous energy can be attributed to the manic vocals, which are tossed back and forth between the members, as well as the aforementioned dissonant guitar work, and of course the odd rhythms and time changes (see the cleverly-titled "Right Church, Wrong Pew", for a sample). And though all eight songs are worthy of attention, some that are a bit more noteworthy than others are the frenetic opener "Hey, Let's Spend the Night Together", "Right Church", a song that is somewhat reminiscent of indie lo-fi rockers The Peechees at times, "The Hot Hand" with lines like "Push away, you can't learn to fight the good fight with T-N-T and fists" (for some reason it just sounds so cool...), and "Let's Get Past That", which opens with punishing drums, alarm-like-sounding guitars and distorted monotone vocals. "Summer Lovin'" is interesting too, as it features dual male/female vocals - I don't know who the girl is, as I have not the credits, but as can be seen, I DID manage to get a hold of song titles...Great release.

The Shrooms, La Bestia, a six pack, a some dudes backyard

We Will Bury You!