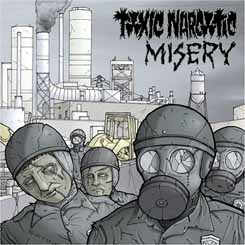 No newcomers to the scene, Minneapolis' Misery have been around since '88. Though vicious, seems the stuff on that collection they put out ('The Early Years'), which, as the name implies, includes their earliest releases, is angrier, darker, and more bludgeoning than that which appears on this split with Toxic Narcotic. Some songs are deeply politically-charged, as would be expected from these crusty punks, including "Sane Asylum" and "Believe?" The former deals with how society makes the outcasts the way we are, which is reminiscent of Suicidal Tendencies' "Institutionalized", as Misery convey messages like "I went to your schools, went to your churches/Surrounded by fools bloodsucking leeches." But Misery up the socio-political ante with lines like "You mute the truth 'cause you're scared of the sound/Shelter your children so they're blind like you/Lock me away 'cause I can see through the bullshit walls you've built so strong." "Believe?", a great song that oscillates between slow and mellow instrumentation and feral hardcore, rails against religion and politcs, which are comprised of "murderous filthy fools" who bring about war and corruption. Musically, Misery are brutal, fast, and heavy hardcore with raspy, tough vocals.

Toxic Narcotic keep on keeping on after 15 years, as is evident on their side of the split. The maniacal Boston mainstays, with their inconceivably speedy and heavy hardcore punk full of socio-political tirades, first start out a little less somber in their message, as they berate what punk has become, defiantly proclaiming they'll never go soft in order to fit the mainstream, but rather will "play as brutal as we want, we'll never go away." The guys' views on society becomes blatantly obvious as they tear into the excellent "I Hate You", where they blame religion "for this world full of shit." "Ever So Slightly" starts out really oppressive and rather deliciously sludgy ﾖ and stays that way for the song's duration. Great break from the thrashy-goodness that makes up the rest of their offerings, and "In the Mouth" relates the dreadfulness of capitalism and how no matter what our choices ﾖ ahem ﾖ we're all doomed, as they say... "21st Century Catastrophe", meanwhile, is slower and features a great ska-tinged beat, which turns heavier and faster as the song progresses, a la "Cockroach".

The Dwarves Must Die