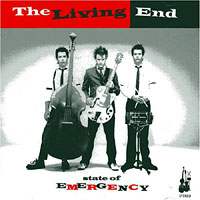 There are no songs about kangaroos or alligators in the newest album from The Living End. This is the bands fourth album, which is produced by Nick Launay (INXS, Silverchair). This group of individuals hails from Melbourne, Australia, which really gave them street considering their first three albums were released by Reprise. Adeline Records will put out this album July 11th.

The Living End are sure to make a bigger splash in the United States with State Of Emergency, this album is full of soft spoken vocals and at times redundant lyrics. A type of soulful alternative band, The Living End has put a lot of time into all 14 tracks on the album. The album itself goes from fast to slow, which I would think would make for a hot live show. Warped Tour has pulled The Living End to come and play the month of July for them. Then they will be heading out on a headlining tour in August; which is sure to give them a full schedule.

With a clear spoken voice lead singer Chris Cheney (who also plays guitar) has great voice in the album but I feel its missing something and honestly It could be my opinion but I think the vocals do not match up with the music. Some of the time I feel it could use a faster paced and a more assertive tone lyrically but it really makes only a smudge on the scheme of things. The album as a whole is really good lyrically and musically; even though there may be a thing or two I sliked about it. That's my opinion, but if you like Alternative and/or Punk music you should give this album a try.