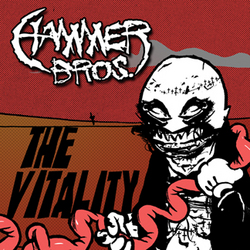 Album Review
Hammer Bros
Label: Crosscheck Records
Reviewed by thebronx
Fast paced and in your face hardcore movement is coming for all you non-believers who doubt bands like Bad Brains and Cro-Mags, well now you have to The Vitality. Hammer Bros have been in the hardcore scene since 2003 and have since been taking the fast paced heart pounding beats from metal/trash music and blending it with the hardcore as we know it today. Whether you seen them with Death Threat or Slapshot you will never forget Hammer Bros.

This album is full of speed and precision and completed by a rage of rash and lethal lyrics, which are sure to keep you intact. Hammer Bros seem to be one of a few bands out today who are very fan based and a band take their influence musically and make the best record they can out of it. Now the album musically is kind of like an onion; I mean if you take the first track and keep digging into the album you pretty much are going to get something different but something the same. Comparing the band to a vegetable is really the only thing I can say because they put Thrash, Metal, and Punk in the album but in general it keeps the same feel.

Hammer Bros are something to be talked about and I see them making a name for themselves as pioneers in a genre that is trying to keep its head above water. Check out Hammer Bros at http://www.myspace.com/hammerbros and you will see what the rave is about.