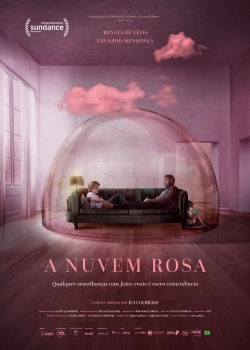 A poignant and eerie prediction of the very visceral unfoldings that life in a pandemic can have on a couple, Brazilian director Iuli Gerbase’s film The Pink Cloud was shot prior to COVID-19, yet echoes many of the afflicting sentiments that can consume the human spirit while in isolation. Having met at a party one night prior to lockdown, Giovana (Renata de Lélis) and Yago (Eduardo Mendonça) are confined to a two story apartment after news reports of a mysterious and omnipresent pink cloud causes near immediate death to anyone that steps outside and breathes in its fumes. With no definite answers as to when the cloud will disappear, Giovana and Yago are rapidly forced to create a life together, the only means of communicating with others are through virtual screens and the only ways of understanding each other are found within the confines of their walls. A considerably apolitical film, Gerbase instead shines a lens onto the intimacies found within her characters and poses existential questions of how two individuals can form a life together amidst the push and pull of familial responsibilities and a desire for freedom.

The implications of a global lockdown become apparent near the start of the film as orders for necessities and food are delivered to each household and various means of social media are used to keep in touch with family and friends. Conversations that normally wouldn’t enter the relationship realm until years down the line are expedited as the couple’s thoughts on having children clash. Giovana is adamant about keeping her flexibility and independence while Yago is determined to settle down and start a family, his way of compromising being to have one child instead of two. Despite a surprisingly calm initial period together, we now sense various tensions seep into the roots of their relationship after an addition to their household. While going through labor at home with the guidance of a nurse on the other side of a screen, the birth of their son contrasts with the camera panning over framed photos of family members on the walls, a weighty reminder of how much change has occurred since the start of the pandemic compared to how family interaction and celebration used to be. Attempting to add some excitement to their dynamic and role-play their fantasies, they continue to fall into complacency and avoidance of communication, mirroring universal issues that couples face with or without a looming pink cloud. Ultimately they decide to separate, but the sole constraints of a physical stairwell marking their divorce makes it obvious that there is no simple solution.

Social media plays a significant role in defining their isolation and connection with others. Yago’s father depends on medication in his old age, yet as the years pass he eventually loses touch with reality, slipping into dementia (or potentially a psychotic state) and can no longer recognize his son through the phone screen. Meanwhile Giovana’s close friend Júlia has been living in solitary confinement, the utter lack of physical touch and warmth from another human being clearly affecting her mental health. “Antidepressants won’t bring other people to my home”, she laments to Giovana after a FaceTime session. The apartment gradually becomes more clustered with screens and technological devices as the distinct differences between Giovana’s thirst for adventure and freedom and Yago’s desire for more traditional values cause them to delve further inward into their mental and spiritual disconnect. Gerbase doesn’t get too literal about the why’s and how’s of The Pink Cloud, but rather leaves the door open to interpreting this massive overhead figure, intentionally choosing a non-threatening and incredibly alluring image to indicate either our collective humanity’s fear or enticement of what the future and the unknown have in store for our lives.