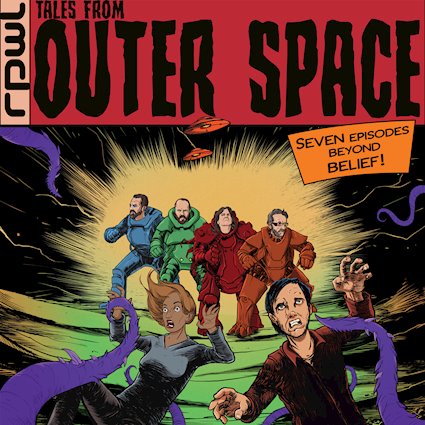 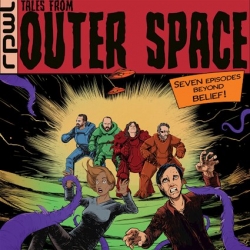 Tales from Outer Space is certainly a highpoint for RPWL, as it stays musically imaginative and intellectually motivating from start to finish.

Although they began as a Pink Floyd cover band—and yes, that influence is still readily apparent in their work, especially in terms of vocalist Yogi Lang’s Gilmour-esque timbre—German outfit RPWL has spent the last twenty years or so steadily setting a revered place for themselves within the modern psychedelic/progressive rock landscape. With several wonderful original studio collections under their belt, it’s fair to say that they’ve accomplished that, on their latest outing, Tales from Outer Space, the quartet maintain—if not exceed—that singular excellence. Soaring with sleek sing-along melodies and affective instrumental atmospheres, it’s a markedly captivating and cohesive journey.

A complete dive into sci-fi concepts and social commentary, Tales from Outer Space breaks the fourth wall by having its extraterrestrial inhabitants actually interact with RPWL, discover “how much suffering and evil [has been] caused by humans . . . and immediately leave again, completely shocked.” Lang clarifies that the record is comprised of “seven short stories” whose themes allowed them to “experiment with sounds and all imaginable musical stylistic devices.” True to his account, the full-length never fails to feel invigorating and investigational in the midst of upholding classic RPWL traits.

Fittingly, the LP opens with “A New World,” whose foreboding synths, thumps, gruff guitar lines, and all-around sentimental astral menace conjure comparisons to IQ, Cosmograf, and Marillion while still feeling sufficiently individualized. Its shifts between sparse quandaries and full-bodied declarations are powerfully dynamic and emotionally entrancing in equal measure, with Lang’s modest and charming commands ranking amongst the catchiest passages in the band’s whole catalog. Thus, it’s a breathtakingly inspiring and urgent way to start.

Afterward, “Welcome to the Freakshow” makes greater use of personable harmonies and moody effects and temperamental shifts (especially at the halfway point, when a piano-based bridge aids echoey narration in establishing otherworldly storytelling). In contrast, “Light of the World” is warm and uplifting, as lots of gentle guitarwork and keyboard swirls coalescing into dreamy proclamations. Of course, there’s also some symphonic weight thrown in, and guitarist Kalle Wallner nearly steals the show with a stellar solo. The subsequent “Not Our Place to Be” brings yet another stark yet fitting juxtaposition in the form of self-described “horror strings” that coat the surreal yet straightforward rock around it. Thus, it succeeds at wrapping the listener in an inviting yet slightly alien—put intended—"feeling of entering a strange planet,” including a zenith keyboard solo courtesy of either Lang or Markus Jehle.

The remaining trio of tracks easily contains some of the standout moments on Tales from Outer Space. For instance, the relatively commercial ballad “What I Really Need” borders on pure blissful pop in all the best ways (including shimmering tones and female backing vocals). Next, the penultimate “Give Birth to the Sun” recalls early gems like “Hole in the Sky” in its touching otherworldliness; honestly, the midsection instrumentation is undoubtedly the peak of the whole puzzle in terms of surrounding the audience in evocative, multifaceted instrumentation (a la something like Ayreon’s The Universal Migrator Pt. I: The Dream Sequencer). Lastly, closer “Far Away from Home” begins with sounds of nature before transforming into a rich and hopeful ode led by piano. The other instruments come and go naturally as needed, with drummer Marc Turiaux continuously finding a balance between sophistication and steadiness. Like all great finales, it simultaneously conveys a sense of closure for the trip and a desire to return to it ASAP.

Tales from Outer Space is certainly a highpoint for RPWL, as there isn’t a wasted moment in the whole set. Rather, it stays musically imaginative and intellectually motivating from start to finish, and its comparatively short runtime—fifty minutes—definitely makes a case for quality over quantity in terms of modern artistic expectations. Sure, the wait has been long since 2014’s Wanted, but fans of RPWL—and the style in general—will surely find that the wait’s definitely been worth it. I, for one, can’t wait to hear where they take us next time.