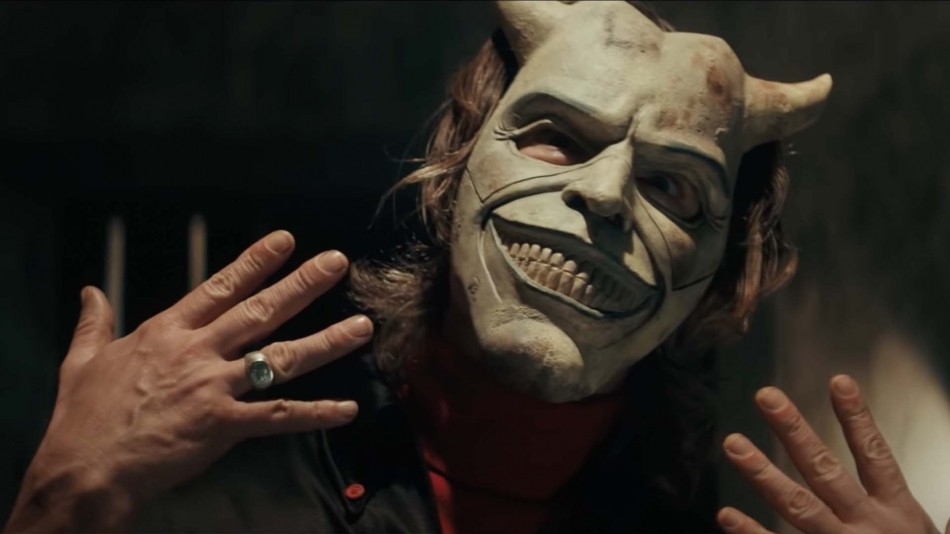 Based on a short story by Joe Hill (Stephen King’s son), Scott Derrickson’s The Black Phone had its feature debut in the fall of 2021 during the genre-loving film fest, Fantastic Fest. Combining elements of suspense, thriller and the supernatural, the film sets the scene for a masked murderer (Ethan Hawke) leading kids astray with the promise of magic tricks only to take them hostage as prisoners in his basement. Finney (played by burgeoning actor Mason Thames) and his sister Gwen (Madeleine McGraw) have no choice but to stand up for themselves at school with the constant underlying threat of being bullied, unable to lean on their drunken and abusive father or their deceased mother (who passed by means of mental illness and suicide). Simultaneously played out like a coming of age story, Finney must rely on the voices coming from the grave over a receiver to plot his escape.

Set on the cusp of the 70's and 80’s, The Black Phone conjures nostalgic elements of Stranger Things and It, with a sinister case of adolescents mysteriously gone missing. Constantly tormented by most of his peers, Finney is in direct opposition to his little sister, Gwen, whose boisterous and stubborn attitude more often than not gets her into trouble. Yet she has an intuitive knack consisting of dreams conveying that something isn’t quite right in their small town and leading her closer to her suburb’s location for evildoing. Once Finney gets kidnapped and forced to stay in a bareboned basement consisting solely of a small window and a disconnected black phone, he too taps into his inner impulses in order to figure out how to break free.

The Grabber, as he comes to be recognized, is a sinisterly shadowed character, never caught without wearing his unique and emotionally-cladded masks. The rollercoaster of tones and sentiments he outright expresses while Finney is trapped under his floorboards adds to the film’s mood of unease and occasional jumpscares. Tinkering on the edge of extreme sleep deprivation, The Grabber’s increased agitation leaves us wondering how much longer he and  Finney can keep up their game of cat and mouse. An ominous soundtrack only adds to the viewer’s sense of claustrophobia in the mouth of the basement’s dark and enclosed four walls.

Ethan Hawke's role as a child serial killer undoubtedly steals the show, while most (first time or rising) actors in the film stall in their acting capabilities. Finney maintains a one-toned indifference while his sister provides comic albeit goofy relief in her rebellious and precocious ways. Nothing much about the premise of the film or its details are particularly novel, aside from what feels like overtly violent behavior at school and behind closed doors. That this is tied to one of Finney’s many routes of escape feels fairly lackluster and trivial combined with a placid climax. Derrickson’s The Black Phone fits neatly in the entertainment category and doesn’t get overly obnoxious with its paranormal elements, but if you’re looking for a thriller with substance or bringing something new and risky to the table, might I suggest you look elsewhere.