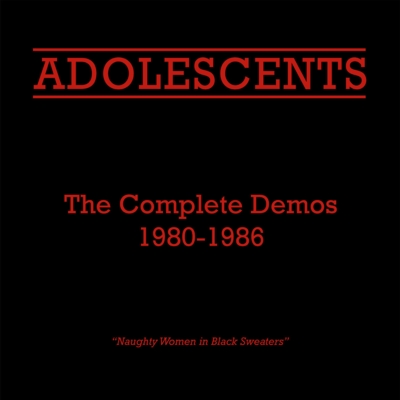 Album Review
Adolescents, The
Label: Frontier Records
Reviewed by Janelle
On the heels of releasing their live DVD for Kung Fu's 'The Show Must Go Off!' series recorded at The House of Blues (watch it with the commentary ﾖ great stuff...!), The Adolescents, who are celebrating their phenomenal 25th anniversary this year (they formed in Fullerton, 1980), have a "new" album out, 'Naughty Women in Black Sweaters ﾖ The Complete Demos 1980-1986'.

Fans get ready: out of the 16 tracks presented, 14 are previously unreleased and there's some cool liner notes from original members vocalist Tony Reflex (a.k.a. Cadena), bassist Steve Soto, and guitarist Frank Agnew. As the title would imply, this isn't new material but rather demos from way back when... In fact, the first four offerings were recorded in 1980 in "Tony's mom's garage" (and by the sound of the production ﾖ shoddy and gloriously murky, there's no question about the veracity of this claim!) and seem a young band raucously trying to find their sound, while singing of alienation and angst. After these few offerings comes fare (with clearer, less muddy production) that will be familiar to most: songs like "I Hate Children", "Creatures", Amoeba", and the impeccable "No Friends", which all exhibit a young band who at this point have honed their skills and refined their signature sound, which is punchy, intense, melodic punk with an undeniable dark edge ﾖ and still snotty as hell. In alternate forms, of course, they'd appear on the band's legendary 1981 self-titled debut LP known affectionately as "The Blue Album", hands-down one of old-school hardcore punk's finest works.

Other songs included here are the odd "Do the Eddie", a kind of freaky, super-fast onslaught (whose origins Steve describes in his section of the liner notes) and "Richard Hung Himself", an exceedingly dark song perhaps more well known via D.I.'s classic version. But quite possibly the greatest songs on this collection are the final two, both recorded when the band reunited in '86, which according to the liner notes, were salvaged from a tape actually found in Tony's garage: "The Liar", an aggressive and feral rant against Reagan and "The Peasant Song", which though a bit catchier and not as heavy, is still tense. Essentially, this final tune is just a fabulous tour de force.