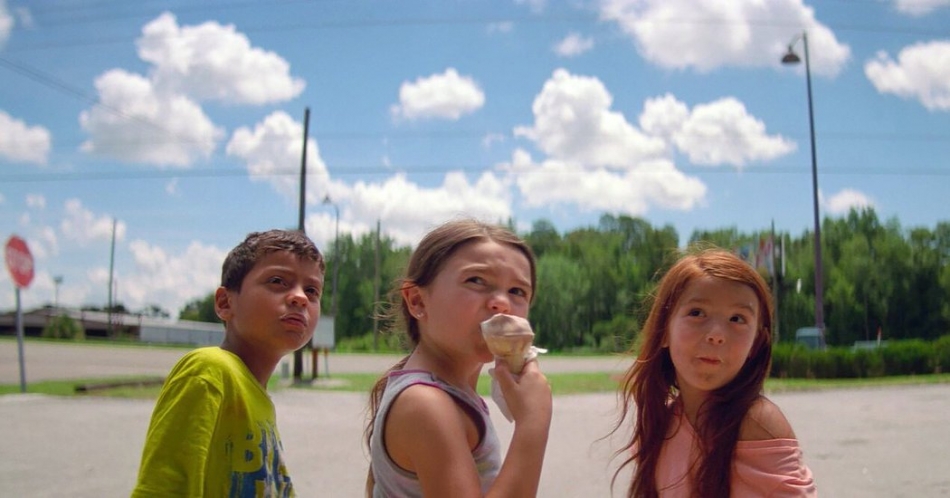 Spanning the course over one stifling Orlando summer, The Florida Project is an authentic examination of the poverty-stricken’s day to day living right under the wealthy’s umbrella. Six year old Moonee (played flawlessly by Brooklyn Prince) lives alongside her young, single mother Halley (Bria Vinaite) on the outskirts of Disney World, renting a three story motel by the week and doing the best they can to get by. A constant ball of unbridled energy, Moonee treats the enclosures of the Magic Castle and the outlying tourist trap gift shops, dollar stores, and ice cream stands as her own fantasy world, a landscape that provides Moonee and her friends with endless entertainment yet simultaneously presents an uncertain future. Another stunning film from director Sean Baker of Tangerine and Starlet, The Florida Project portrays a humanistic outlook on the transient nature of low-income communities struggling to survive amidst a tourist trap landscape.

Baker’s use of Disney World’s outside environment reads like a thriving character in and of itself; brightly painted storefronts, signs and motels depicting fantastical names like Futureland Inn and the Magic Castle juxtaposed with internal bedbug infested mattresses, limited material possessions, and contained chaos just a mile outside of Seven Dwarfs Lane. Flowing less like a structured narrative, The Florida Project follows Moonee on her whimsical adventures with her close friends living in either direction of her motel room or down the street. From innocent hide and seek games to subsisting with reckless abandon and setting old buildings on fire, Moonee’s itch for amusement is one that never quite gets quenched due to the limited resources her home and mother can provide for her. Halley steps in as more of an older sister rather than motherly figure, dropping her guard when it comes to cursing or throwing the finger and finding ways to hustle and lure in tourists for their money before rent is due. Maintaining a semblance of order within the motel, Bobby (Willem Dafoe) manages the ins and outs of the building, balances an empathetic stance towards the individuals’ needs living in the Magic Castle yet enforces guidelines which still stands with everyone’s best interest at heart.

The Florida Project doesn’t aim to provide a black and white template with the intention to stereotype the impoverished. While Moonee and Halley remain at the forefront of the film, the varying residents in the motels reveal their differing hurdles, tensions and strengths. Often they rely on one another for moral and financial support, building a complex and fluctuating web between individuals that reads like a precariously balanced society, always near the brink of toppling yet continues endlessly to thrive. Shot on both digital and 35mm film, Alexis Zabe’s keen eye for visuals illustrates a sense of wonder and child-like simplicity painted against the backdrop of striking colors and distinctive murals. The Florida Project is an honest portrayal of low-income families free from judgement, serving as a reminder that there is constant beauty surrounding us where we think we’re least likely to find it.