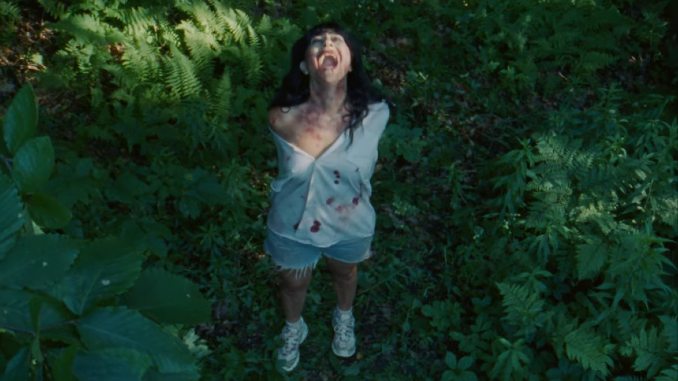 Seminal darkwave band of the moment Boy Harsher have released a long-form music video, The Runner, to accompany their new album. The film school-based synth nerds are building upon their recent underground success of the 2019 album, Careful, and the insta-classic minimalist-electro single “Pain” with this CoVid place-holder album and accompanying short-film.

I had a viewing of this horror short, co-produced by streaming service Shudder, at the Austin Film Society with no expectations other than some stylistic sadism that you’d come to expect if you’re a fan of the group. And they deliver on that sentiment. We have a brutal and bloody revenge tale replete with De Palma-esque, Argento atmospherics. Imagine a rural-American meth seeping take on Cannes Palme d’Or winner Titane and you’d be close to the mark. The loose narrative follows a traumatized, blood-soaked heroine first found wandering in a remote, lush forest. The story unfolds and you have to piece together whether we are watching a victim playing out a revenge tale or if we’re watching a sex-vampire reminiscent of a Birthday Party song going about their day-to-day activities. Spoiler: there is no resolution to this puzzle.

Fellow traveler musician, Kris Esfeandiari, plays the lead and retains the required mystique throughout. There is no motivation for her character’s atrocities. The only hints we get are from phone calls she receives from a character billed as The Desperate Man; perhaps a mirror of the character’s psychosis, disturbingly hissing to her over the line, “stop, you don’t have to do this”.

The narrative is cross-cut with segments from the band recording their new songs and musing on their musical rituals and passively remarking on the film’s story. Roland synth operator of the duo, Augustus Muller, remains distant from the horrorshow, blithely commenting on the comforts of his synth method while vocalist Jae Matthews hints at an autobiographical subtext to the film’s protagonist. She relates to the murdering women and we are not given an explanation why.

The film is ultimately unsuccessful in its weaving the band’s process within the structure of the film and how we follow the character. The band are the directors and producers of this short and they betray their strongest asset as a group, their minimalist mystique, with too much non-sequitur commentary during the documentary portions. They should have stuck with the less-is-more aesthetic of the music and just rode on the Gummo meets John Carpenter alchemy of the feature. The juxtaposition of the recording process severely handicaps all of the strengths of the horror portion and its striking imagery.

There is much potential to work with here. It’s predictable and amateur-ish certainly, but the atmospherics can be engrossing at times and there are some nice hints of J.G. Ballard inspired body horror and grotesque American media juxtapositions. Are the character’s actions amid rural desolation a mirror of the absurdity of the TV news, infomercials, televangeslists, and shallow pop star videos? At the very least it’s good for a moody divergence to put on in the background with its immersive atmosphere and throbbing gristle of a soundtrack. However, its cinematic pretensions don’t hold up and the influences on the product are worn a bit too on their (non-existent cut-off t-shirt) sleeves.

With its sufficient gore quotient and seedy environs, The Runner sits well with the Shudder crowd full of body horror freaks, but like much of the original content produced by the service the cinematic experience is a bit lacking. More focus could lead to unknown pleasures  in the band’s video future. Long live their new flesh in our Videodrome!