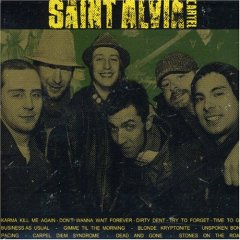 Album Review
Saint Alvia Cartel, The
Label: Stomp Records
Reviewed by ChrisK
Burlington, Ontario's own, The Saint Alvia Cartel took the airwaves by storm with the release of their debut, self-titled full-length earlier this year in Canada. The band has now finally made available their critically acclaimed CD in the U.S. for the first time, on June 24, 2008.

The Saint Alvia Cartel is comprised of former members from legendary bands such as Boys Night Out, Jersey, Grade, and the Video Dead. Their styles combine to form a signature blend of punk, reggae, new wave and full-on rock.

While the album may not be groundbreaking, it is enjoyable and part of that is because the band does changes styles so frequently from song to song. One minute the album is blasting a reggae inspired tune, the next straight up punk rock, then pop punk, there is even a Caribbean inspired tune.

This CD is a totally refreshing surprise, especially given the mixture of styles compared to the former bands the members once contributed to.

Check out a couple of videos from the new record.

In the Name of Progress

Its A Struggle To Communicate