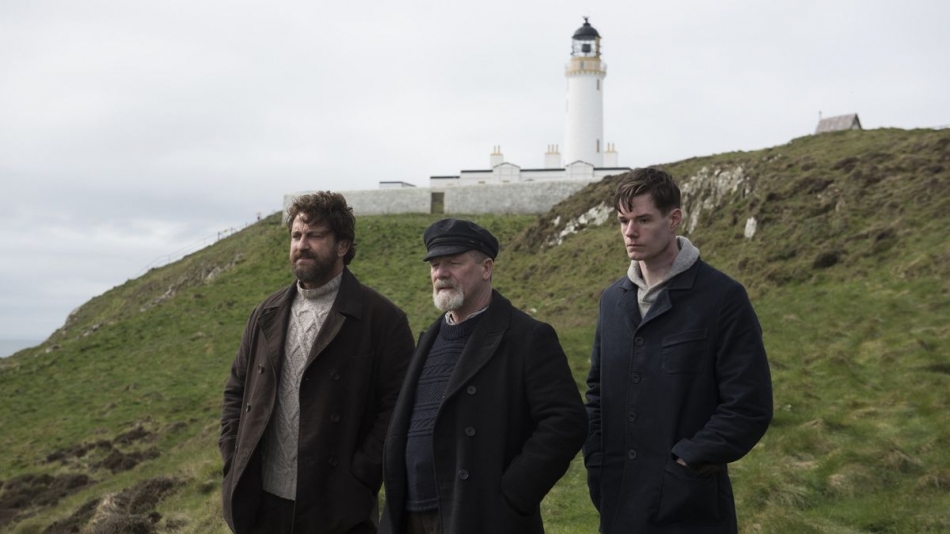 Remaining shrouded in secrets over a century later, the Flannan Isle mystery reveals little about three lighthouse keepers who went missing off the northwestern island of Scotland, their bodies never to be found and the circumstances underlying their disappearance never to be discovered. Speculations from severe weather catastrophes to abductions to extraterrestrial encounters have been accounted for, but director Kristoffer Nyholm takes his own stance in predicting what may have took place on the isle to unfold in his thriller-suspense film The Vanishing. Responsible for taking over the prior crew's duties, keepers James Ducat (Gerard Butler), Thomas Marshall (Peter Mullan) and young Donald McArthur (Connor Swindells) are in for the long haul as they settle in and get to know one another on the isle's desolate landscape. One evening they stumble across an abandoned rowboat with a man feigning dead, and after a severe tussle McArthur bludgeons the stranger to death out of self-defense. Upon uncovering hefty bars of gold secured in a trunk on the rowboat, the men must steer through fear and greed, not only within their own conscience but also between each other and with the other men who eventually come looking for their hefty treasure.

Cast in eternally dreary skies and cut off from civilization, the Flannan Isles marks prime territory to mask the why's and how's of men who might go missing in its isolated landscape. The isle's turbulent weather is out of their control, and the audience can slowly see how problems start to arise after a mercury leak and dead seagulls blanket the outer grounds of the lighthouse, as well as the psychological conflict that begins to take its toll on the men. Peter Mullan's unwavering performance is genuinely compelling as he not only carries sincerity through his actions and words but also through emotional weight, each subtle expression of his displaying another layer of inner dialogue and anxiety. Often the voice of reason, Thomas refuses to let selfish desires dictate his behavior and aims to lead his fellow crewmates down the same path. Once warm then turned volatile James allows his actions and guilt to get the better of him as tensions between him and the young Donald start to escalate. An initial act of violence that ensues out of personal safety spirals out of control with further violent repercussions, taking place in such a short period of time that the madness that overtakes James and Donald can feel somewhat difficult to fathom. Yet we can't help but put ourselves in their shoes, wondering what course of action we'd take under such dire circumstances. "I can't come back", laments James as each lighthouse keeper struggles to hold his head above water under the varying degrees of guilt they now have to reckon with. Nyholm's film is an interesting though perhaps improbable lens into the continual mystery of the Flannan Isle disappearances, yet its statement concerning the weight that guilt and desire for forgiveness can have on an individual casts an immense stronghold, convincing its viewers that plausible answers to mysteries may be best left untold.