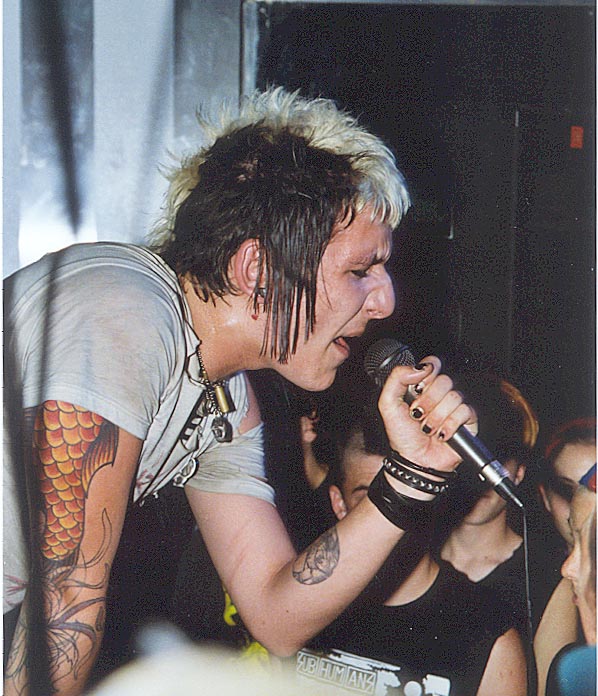 Right from the start there were a couple odd things about this show. First, I never was able to actually find out when it started. Some sources said 6:30, others 6. But a half-hour is rather trivial, no big deal. However, upon arriving at Club Pure in Mineola at around 6, to my surprise a band, the Back-Up Plan, was playing already and apparently, three others had played - the show in fact started at 4. But the main bands advertised on the bill - Blind Society and the Virus - hadn't gone on yet. So, in a sense what I came for was to begin around 6:30 and all would go as planned…or so I - and the rest of the crowd - had thought…

This was not to be, as no one knew the exact whereabouts of the bands. They weren't at the club, but stuck in traffic somewhere in New York. The details are still unclear, but I was told something to the effect that both bands were traveling together and suspected they were on the Tappenzee Bridge. All the bands knew was that they were on a bridge that began with a "T" and it "curved." Right then. After a while, we tried calling up Jarrod, drummer of the Virus, but our attempts at contacting the guys were futile. At last word came they were on their way, and when the bands finally did arrive and walked in the door at around 8, they were greeted by faux jeers and heckling from some members of the Casualties seated at the bar.

And so everything was finally set up and New Jersey's Blind Society ripped into their manic set, playing uncompromisingly speedy, aggressive hardcore punk. What adds to this five-piece's appeal is the visceral dual vocal onslaught from Chris and Blaise. The band appropriately apologized for their late arrival - damned traffic on their way here from Buffalo - and called for the kids to get a circle pit going (this is New York, they pleaded) because even though their music is so brutal and enticing, people weren't really moving around…that is until the singer's pleas were heeded and some of the crowd started running riot on the dance floor. Some of the songs the band tore through were "Nuclear Warfare" off their debut "Our Future Is Looking Bleak" and "Rebellion" from 2002's "Contrary To Popular Belief." We also got to hear a new one called "Far From Nowhere" that was dedicated to Josh, one of the Virus' guitarists. And Blind Society really outdid themselves closing with the legendary Black Flag tune "Rise Above." Well, the action that was seen on the dance floor during this last number certainly made up for the lack of dancing during the beginning of their set. Pure chaos. However, either because they were late and felt rushed - that they had to finish up quickly, or just because they were originally not allotted much time to play, the band's set was over much too quickly.

Any qualms about this show ultimately dissipated once the Virus took the stage, which was barely large enough to contain them or their overwhelmingly abundant energy. Playing one infectious street punk anthem after another with very few breaks in between, this Pennsylvania band that refuses to let the spirit of '77 die, immediately had the (unfortunately sparse) crowd going. The majority in attendance were crammed right up to the stage, eager to share the mike and sing-along to these maniacally fast, bludgeoning songs. The band has undergone numerous line-up changes since its inception in early 1998, and yes, 2003 sees yet another. This tour is the Virus' way to show off their latest incarnation since the recent departure of vocalist Paul, and let's just say the synergy and intensity between these five guys was certainly apparent from the get-go. We were treated to classics from both their LPs, including "Already Dead," the frantic "Terror" with all its sense of urgency, and the indisputably GBH-like "Rats in the City" off their 2002 Punkcore release "Nowhere To Hide," as well as material off their 2000 debut full-length "Still Fighting For A Future" like "Battles" and the undeniably catchy "Forgotten Rebel." Two more standouts were the unsurpassable "The Time Is Now" and "Full Circle."

And like Blind Society before them, the Virus also apologized for being late, and ended their set, which likewise could have lasted at least a good twenty minutes longer, with a cover of the Angelic Upstarts' "Last Night Another Soldier" - a nice addition to their already impressive repertoire, and closed with a fan favorite, "Throwaway Kids," another song that like "Forgotten Rebel," is one of the band's more upbeat, catchy tunes. It was a good way to end a hectic, sweaty, impassioned set, and was also a nice conclusion to a somewhat-frustrating evening. Well, at least the two bands showed up and played well, making all the waiting worthwhile.