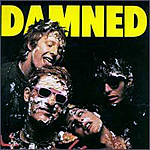 Album Review
Damned, The
Label: Stiff Records
Reviewed by Janelle
To paraphrase the Book of Genesis loosely, God said, Let there be British punk rock in LP form: and so it was. Yes, indeed, with two pounding lines from Captain Sensible's booming bass, the dawning of an exciting new age had arrived. Beating out fellow British punk pioneers the Sex Pistols and the Clash to release "Damned Damned Damned" in early 1977, the Damned were the first to accomplish a number of things, namely release a single, "New Rose" in 1976; tour America, albeit only performing a handful of shows; and to break up, although the Damned, in all of its altered forms, has somehow managed to persist these past twenty-seven years.

In any case, "Damned Damned Damned" is a glorious record, a sheer punk rock masterpiece for the ages. Consisting of defiant, acerbic, and cheeky lyrics coupled with rapid-fire tempos, this record has a young and fresh feel to it that hasn't diminished at all over the years. Similarly lending to its exciting and raw feel is that it's not overly-produced or polished, which only adds to its magnitude and longevity. The record encompasses everything that made the Damned, in its original form, consisting of vocalist Dave Vanian, drummer Rat Scabies, Brian James on guitar and the indefatigable Captain Sensible taking up bass duty, so memorable (although 2001's foray "Grave Disorder" is their best offering in years), and is a testament of, to quote none other than the great novelist Charles Dickens, "The youthful poetry which was once so captivating in them." In other words, the combination of the chemistry between these guys, their rebellious and youthful outlook, and their unpredictability was so paramount to the impressiveness of this record.

Clocking in at just over thirty minutes in length, this album is a cornucopia of tremendously fast yet artistically sophisticated and highly developed songs, most of which were written by James. The bona fide classics are, of course, the aforementioned "New Rose" and the opening track "Neat, Neat, Neat," a song that, with its manic guitar riffs, steady bass lines, relentless drumming, and Vanian's frantic vocals, shows the listener exactly what he/she is in for. In fact, there is only one break in the action with the blatantly macabre grand opus "Feel The Pain." The Damned flirt with darkness, no doubt, on this unsettling sixth track. A disturbing song, with its dissonant guitars and eerily haunting vocals, it is a harbinger of what was to come in the band's future. That is to say, we see the band experimenting with a more "Goth" sound and Vanian at his most theatrical, conveying the song's sense of hysteria and madness brilliantly as he croons:

Drop some booze, time to choose

Why your heart is just a stabbing

The nature of your hacking

Back to front, the blade tastes blunt

In the safety of your bedroom

However, after this momentary break, there's nothing but full-on speed speed speed (...um, sorry).

Other noteworthy tracks include "1 Of The 2," "Fan Club," with its lyrics that go from witty: "Waiting for an autograph you must be mad/Standing in the pissing rain must be a drag," to downright morbid: "Will you send me pretty flowers while I'm slashing my wrists?," the devastatingly fast "Born to Kill," in which the band just unleashes pure instrumental havoc, and "I Fall," which is chaotic, especially near the end with James' feverish guitar solo and Rat's explosive, fiery drumming. Pure auditory bliss. Likewise, they play a spirited rendition of the Stooges' "I Feel Alright" that is raucous and rowdy to no end.

So, as can be seen, "Damned Damned Damned" is a rare punk rock gem, and, along with 1979's "Machine Gun Etiquette" - another absolute tour de force - is the Damned at their most memorable.