“Tigers in the Dark” 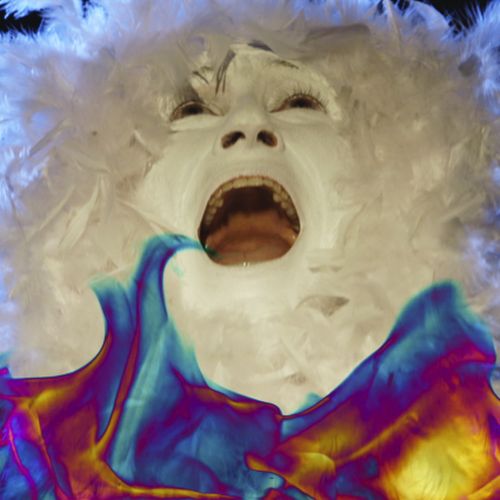 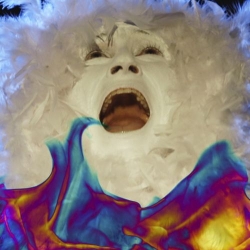 Acclaimed and innovative performance artist/musician Rachel Mason has been making a name for herself for over a decade in multi-media formats including sculpture, live exhibitions, art installations, and music, with recent rock opera The Lives of Hamilton Fish making the rounds.  Mason’s latest oeuvre is the upcoming album Das Ram, which she created with long-time artistic partner Jeff Hassay.

Lead single “Tigers in the Dark”, available September 9th on Cleopatra Records, and its accompanying video directed by Matthew Spiegelman recently rolled out at an immersive live event held at the LTD Los Angeles gallery.  This venue now sits where the legendary English Disco nightclub used to be.  Artist Dennis Hoekstra paid tribute to the club with an exact replica installation and the owner of English Disco, the renowned KROQ radio DJ Rodney Bingenheimer was on hand to play a set of tunes.    Bingenheimer was instrumental in introducing glam rock to the U.S. and later in breaking many of the New Wave and college bands into the mainstream.

In the Spiegelman-directed video, Mason is placed center stage, decked out in a ruff of white feathers and pale face paint, taking on the role of a hybrid creature who lives for the stage, but isn’t inspired by real life.  Mason encapsulates the view of the artist on her lyrics and in the video, where the imagination is a realm of reality and the daily grind wears away the life of the creator.

On the song, Manson’s bold vocals are also in the spotlight.  She stalks along with a purposeful determination, sounding like a cross between Siouxsie Sioux and Karen O., swinging through her lyrics like an acrobat on a trapeze as she dramatically intones, “Only one of us will survive.”  The electronics-based sonic backdrop marches forward with Mason, peppering her vocals with quirky electronic blips and blurts, clacking percussion, the occasional whip crack, and a sharply flat-smacked drum beat.  Mason proclaims with fervor, “Cut the chain / Let me fly / Now the curtain has risen…”, soaring with zeal as a distorted electric guitar line follows her lead.

Rachel Mason - Tigers in the Dark (Official) from Matthew Spiegelman on Vimeo.